Catalytic activity of manganese and copper oxides in the oxidation of sulfur compounds, including sodium sulfide, sodium hydrosulfide and ammonium sulfide was studied. Polymeric catalyst based on copper(II) and manganese(IV) oxides showed high activity, especially in the oxidation of sodium hydrosulfide and ammonium sulfide. Kinetic investigation showed that all the reactions are first order with respect to oxygen concentration and zero—to the source concentration of sulfur compounds.

Cleaning sulfuralkaline waste containing toxic sulfide and hydrosulfide compounds is one of the major problems in refineries and petrochemical plants. Some methods for cleaning sulfuralkaline wastes, such as stripping, degassing, carbonization [1] require a large expenditure of energy and have environmental problems, because they cause secondary pollution of air with hydrogen sulfide and sulfur dioxide.

More promising is the method of catalytic oxidation of toxic sulfides by atmospheric oxygen to less harmful oxygencontaining sulfur compounds such as thiosul fate and sulfate.

In recent years, more widespread heterogeneous catalytic systems were formed by physical or chemical fixing catalyst complexes on the solid support of the polymer carrier. They allow avoiding a number of technical difficulties, including equipment corrosion and environmental pollution by heavy metal salts. These catalysts have high catalytic activity in a wide range of concentrations of oxidized compounds and pH, mechanical strength, chemical and hydrolytic stability, and can be used for 3–5 years. Polymeric catalysts can work in an alkaline medium at temperatures up to 100°С and pressures up to 7.0 kgf/cm2 and in intensive bubbling. Partial mechanical wear of catalyst granules do not reduce the catalytic activity, so the surface granule is regenerated and the new active centers are involved in the catalyst surface [2–4].

Previously [5], we studied kinetics of the oxidation of the sodium hydrosulfide in the presence of the heterogeneous catalyst based on copper and manganese oxides CuO-15/MnO2-5, which showed the highest activity. In view of the availability and the high activity of this catalyst, it have appropriated to investigate efficiency in the oxidation of other sulfide compounds — sodium sulfide and ammonium sulfide, which are most often found in waste water of oil refineries.

The catalyst was prepared by introducing metal oxides into the polymer matrix in according to the method [6]. The metal oxide content, expressed as wt % of metal oxide in the catalyst samples, was determined by means of chemical analysis (example CuO-15/MnO2-5— the catalyst contains 15.0% cuprum oxide and 5.0% manganese oxide by mass).

All reagents were obtained from KAZPELEN and were of the highest grade available and used without further purification. During experiments, the following oxides of the metals with variable valence were used: MnO2 (Russia, GOST 4470–79), CuO (Russia, GOST 16539–79). The used polymer was a type of high density polymer made from polyethylene, known commercially as KAZPELEN no. 15313–003 (Russia, GOST 16337–77).

The oxidation of sulfur compounds was hold in an air bubbling vessel of oxidation tower in the presence of 5.0 g heterogeneous catalyst. The oxygen was fed into the reaction solution with a speed of 12.0 to 84.0 liter per hour. The solution inside the reactor was stirred at a speed of 1400 revolutions per minute. The temperature of the reaction solution was maintained at 60°С with thermally controlled magnetic mixer. Initial concentrations of sulfur compounds ranged from 0.4 to 1.5 wt %. Their concentration in the solution was determined by potentiometric titration according to GOST 22985–90.

The oxidation process proceeds from sulfide (S2–) and hydrosulfide (HS–) to thiosulfate (S2O32-), sulfite (SO32-) and sulfate (SO42-) is expressed by the following equations:

It is known that the reaction of Equation (IV) may proceed far more rapidly than that of Equations (II) and (III). As a result, a considerable amount of S2O32- is left in the solution together with SO42-, which is the final oxidized product.

It is known [7] that hydrosulfide and sodium sulfide are oxidized slowly in the absence of catalysts. Ammonium sulfide is not very stable, rapidly is oxidized even under normal conditions.

These results demonstrate a promise to apply the proposed catalyst in the detoxification of sulfidecon taining aqueous technological condensate and sulfur alkaline waste. 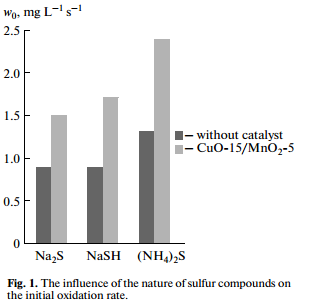 The Kinetics of the Oxidation of Sodium Sulfide, Sodium Hydrosulfide and Ammonium Sulfide in the Presence of Heterogeneous Catalysts Based on Oxides of Manganese and Copper

In homogeneous processes, the catalyst particles have molecular dimensions, and its activity is directly proportional to the active mass. In heterogeneous catalysis involves only the catalyst surface, which is not related to its total mass.

With intensive stirring, the oxidation of sulfur compounds in the presence of heterogeneous catalysts proceeds in the kinetic region. In this case, the concentration of reactants on the catalyst surface and in the solution is equal, but the reaction is only on the external surface. Then the process is determined by the kinetics of chemical reactions.

To select the optimal composition of a heterogeneous catalyst, we investigated the influence of the concentration of a mixture of oxides of manganese and copper in the polymer matrix (with a ratio of MnO2:CuO = 1: 3) on the reaction rate. Figure 2 shows that the rate of oxidation increases with increasing the concentration of the catalyst component in the polymer matrix from 0 to 15 wt %. A further increase in the concentration does not influence on the rate of oxidation, which is probably due to the saturation of the geometric surface of the catalyst active sites. 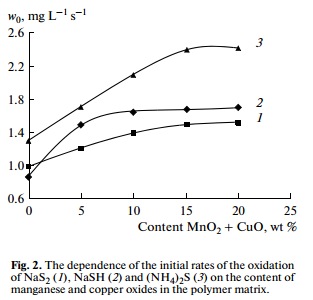 Amounts of heterogeneous catalyst CuO-15/MnO2-5 contained in the reaction solution have effect on the rate of oxidation of sulfide and hydrosulfide compounds. Increasing catalyst amount to 5.0 g leads to increase the rate of sodium sulfide oxidation. The further increases in catalyst amount don’t influence rate of reaction (Fig. 3), which, apparently, is explained by limiting hydrodynamics in the reactor. 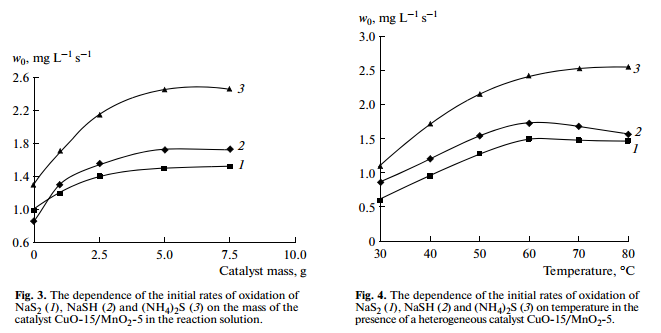 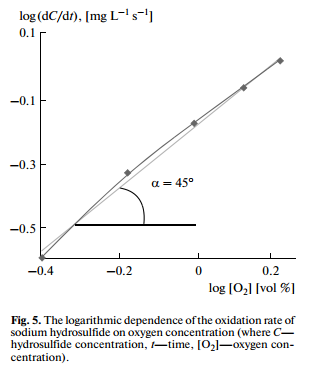 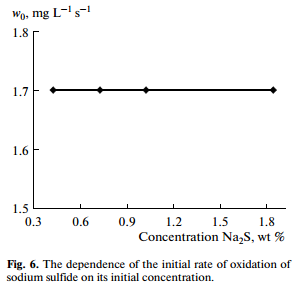 The previous results indicate that the oxidation of sulfide and hydrosulfide compounds is limited by the solubility of oxygen in water, the number of active sites on the catalyst surface and the surface area of the catalyst.

The data presented above suggest that the oxidation of sulfur compounds proceeds by the following mechanism:

The first two stages (VI and VII) occur at a high rate, which is consistent with the zeroorder reaction with respect to the initial concentration of sulfur compounds. In stage (VIII), as proved by the authors [9, 10], there is a transfer of electrons between the copper and manganese cations in a mixture of singlephase oxides MnO2 and CuO. The ratelimiting step is (IX), in which there are the activation of oxygen and the oxidation of the copper ion.