Research in Binary Compositions in Mixtures of Oxides

RESEARCH IN BINARY COMPOSITIONS IN MIXTURES OF OXIDES OF TRANSITION METALS, APPLIED TO THE POLYMER MATRIX, IN THE REACTION OF THE OXIDATION OF SODIUM SULFIDE

The problem of contamination of the environment is of a high importance to the whole of humanity, and due to that fact the enterprises of the fuel and energy complex are executing all measures in order to protect the environment. Ecological norms are getting more and more strict and they impose the increased requirements to all of the processes that are performed at gas and oil refining plants and enterprises which are related to the production and processing of sulfur containing substances. [1]. The sulfur-alkaline runoffs are neutralized through oxidizing the toxic sulfur containing substances and creating the less toxic products, the neutralization is performed through electro-chemical process or with the use of the chemical oxidants. [2, 3]. The most interesting method from these two is the oxidizing of the toxic sulfur containing substances with the air oxygen – this is due to its wide spread availability and low cost. The catalytic activity in this case is present in the salts of metals with variable valence, such as Ni, Mn, Cu, Co, Fe [4].

During experiments, the following oxides of the metals with variable valence were used:

The solutions which were tested, were prepared by the dilution of the 9-watered sodium sulfide in water under GOST 2053-77.

The oxidation of the Na2S in the alkaline solution was performed inside the chemical reactor of the bubble type. The oxygen was fed into the reaction solution with exact concentration of  Na2S  in presence of the catalytic agent which was being tested at a speed of 6,0 – 84,0 liter per hour.-1 The solution inside the reactor was stirred at a speed of 1400 revolutions per minute-1. The temperature of the reaction solution was maintained at 60°C with thermally controlled magnetic mixer.

The starting speed of the reaction was identified by the slope ratio of the tangent to the initial section of the curve of elimination of sodium sulfide.

Results and their evaluation 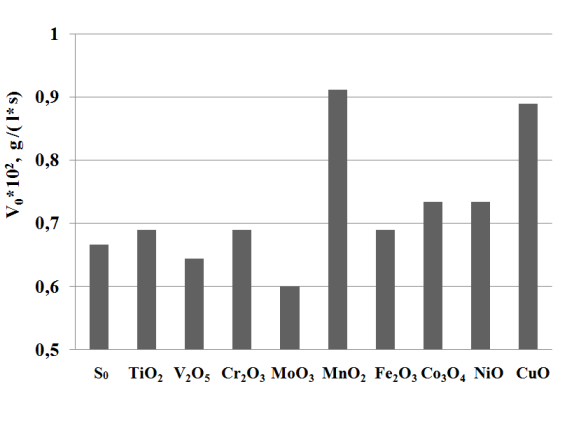 Pic. 1 Influence of the nature of the metal oxides applied to the polymer matrix at the initial speed of the oxidation (V0) of the sodium sulfide.

The results which were achieved are in compliance with the theory of two stage oxidation-reduction mechanism proposed by P.Mars and D. Kreveleny [7]. In accordance with this theory the speed of the catalytic reaction is affected by two factors:

1. The speed of the reduction of the catalytic agent depends on the energy of the chain between the Oxygen — Catalytic Agent (Cat???О):

During this process the activity of the metal oxides is placed in the following order [8]:

In this case the row of activity of the oxides of the metals of the variable valence is placed in the following order [9]:

The research which was performed, have revealed that the activity of the variable valence metal oxides in the reaction of the oxidation of the sodium sulfide is located in the following order:
MnO2>CuO> Co3O4> NiO >Cr2O3.

In the works of the authors [11, 12] the following ability was shown: ability of the execution of the transfer of the single electron in between the cations of the metals with variable valence in the solution of a single phase oxides. Due to that fact, in order to create the more active catalytic agent we deemed necessary to study binary mixed compositions of the oxides of the metals with variable valence applied to the polymer matrix.

Table. 1 Сatalytic activity of the binary mixed compositions of the variable valence metal oxides in the reaction of oxidation of Na2S. 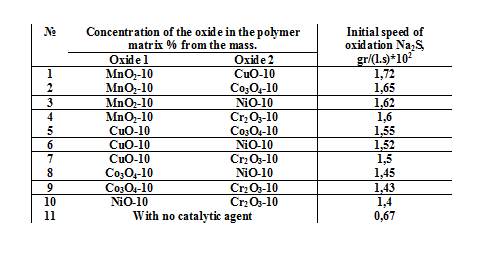 Study of the reaction of the oxidation of the Na2S in the presence of heterogeneous catalytic agent based on the oxides of copper and manganese.

Based on the maximum activity of the mixed catalytic agent – CuO-10/MnO2-10 the research was performed on the selection of optimum composition and proportions of the oxides CuO and MnO2 in the mixed composition with each other on polymer matrix. The maximum concentration of the catalytic component in the polymer matrix reached 20% of the mass. The results of the experiments are shown in picture 2. 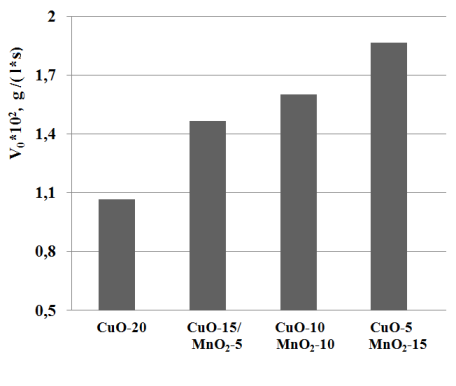 Pic. 2 The dependancy of the initial speed of oxidation (?0) from the proportion of  CuO:MnO2in catalytic agent.

As it can be seen from the graphs above, it is clear that the synergy effect in the reaction of oxidation of Na2S is reached by the mixed catalytic agent of the following composition: CuO-5/MnO2-15 (1.87 g.l-1.s-1). The result that we have received is in accordance with the works of authors [11, 12] and confirms the mechanism of the transfer of the electrons between the cations of copper and manganese in the composition of the single phase oxides MnO2/CuO in accordance with the following scheme.

1. The catalytic properties of the oxides of the metals with variable valence and their binary compositions applied to the polymer matrix in the reaction of the oxidation of sodium sulfide were identified.

2. It has been shown that the highest activity in the reaction of the oxidation of sodium sulfide is present in the binary composition on the basis of oxides of copper and manganese.

3. The mechanism of transfer of the electrons has been proposed for the transfer of electrons between the cations of copper and manganese in the compositions of the single phase oxides MnO2/CuO.

[3] Galutkina,G.А. The use of the methods of chemical oxidation in the process of purification of the waste water of the petrochemical and oil refining enterprises. / G.А. Galutkina, А.G. Nemchenko, E.V. Rubinskaya  – М.: Industrial overview of CNIITENeftekhim, 1979. –page 44.

[5] Akhmadullin R.M.., Bui Din Niyi, Akhmadullina А.G., Samuilov Y.D. Catalytic activity of the oxides of the metals with variable valence applied to the polymer matrix in the reaction of oxidation of sodium bisulfate. Bulletin of Kazan technological university. – 2012. – №1.