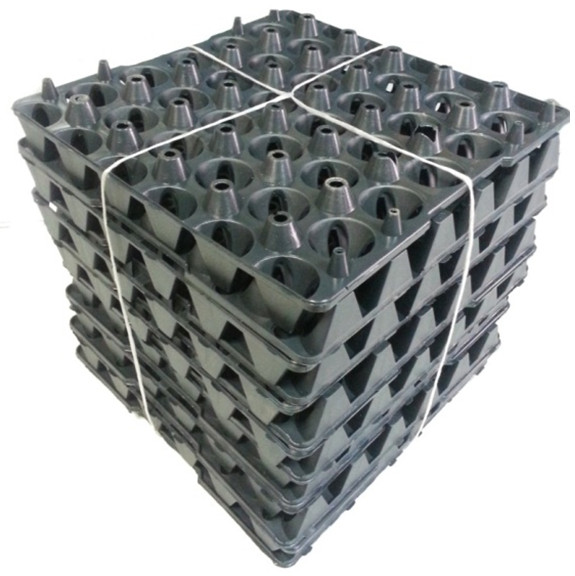 Designed for mercaptans removal from:

As well as, for treatment of:

Catalyst is resistant to acids, alkali, aliphatic and aromatic hydrocarbons up to 100°C. It is insoluble in water and hydrocarbons.

Cost of heterogeneous Phthalocyanine KSM-X catalyst application, during its guaranteed service life of 8 years, is about 1.5 ÷ 3.0 times lower than using homogeneous catalyst for the same period.

Highly effective KSM-X catalyst is greatly demanded by Russian and foreign companies. Its application will also allow getting significant advantages in production process.

– Phthalocyanine KSM-X catalyst have been manufactured and supplied to:

Comparison:
The most widely used method of LPG and light naphtha sweetening processes is alkaline mercaptans extraction with the following mercaptide saturated alkaline solution regeneration by air oxidation in the presence of homogeneous or heterogeneous phthalocyanine catalysts.
When using homogeneous phthalocyanine catalyst dissolved in circulating alkaline solution, oxidation of mercaptides to disulfides proceeds not only inside of regenerator, but also outside – in pipelines and extractor. This is possible because oxygen and catalyst are dissolved in alkaline solution and are carried by it outside the regenerator . Thus, in the extractor, formed disulfides dissolve in sweetened LPG or naphtha, resulting significant increase of total sulfur content in treated product. It is undesirable due to tightening requirements for total sulfur content in fuel: Euro 4 – not more than 50 ppm, Euro 5 – not more than 10 ppm. Using insoluble in alkali heterogeneous KSM-X catalyst, oxidation of mercaptides to disulfides is limited in the volume of regenerator. This eliminates the possibility of total sulfur content increase in sweetened LPG or naphta.

For your information:
First version of KSM-X catalyst (KS) was developed in 1983. Further, LOCOS process with application of KS catalyst was developed  for oxidation of contained in wastes toxic foul-smelling hydrogen sulfide, sulphides, ammonium and sodium mercaptides to harmless oxygenates – thiosulfates, sulfates and alkyl thiosulfonates. In 1985, LOCOS process was implemented at the Moscow Refinery. In 1992, BBF sweetening process (DEMERUS LPG) with KS catalyst was developed and implemented at the Moscow Refinery.

In 1996, new modification of catalyst – KSM was developed. In 2012, it was again improved to KSM-X modification. Our catalyst is intended for mercaptan sulfur removal from LPG, gas condensate, naphtha, kerosene, diesel and light oils, as well as for oxidative treatment of sulfide containing process condensates, produced water and sulfur-alkaline wastes from gas and oil refineries, petrochemical plants, pulp & paper facilities and others. It may also be used in petrochemical synthesis for oxidation of phenols and other organic and inorganic compounds.