Sweetening of light hydrocarbons from mercaptans is produced by their extraction using alkaline solution with it following regeneration by the oxidation of alkali mercaptides  to disulfides in the presence of a catalyst:

Disulfides formed are not soluble in an alkaline solution. They are removed from the regenerated alkali by gasoline extraction.

Using dissolved in alkaline homogeneous catalysts leads to formation of  disulfides also beyond the regenerator ? in pipelines or in the extractor. Disulfides  formed is transferring in extractor from circulating alkaline solution to sweetening light hydrocarbons and therefore increasing the total sulfur content in the purified product.

The same pattern was observed at the Ryazan Refinery while sweetening BBF  in the presence of an IVKAZ alkaline catalyst solution (ACS) [1]. In BBF,  sweetened from mercaptan sulfur up to 0.0002% wt. was contained up to 0.002%  sulfur disulfide. Sweetening unit inspection found that in the regenerated ACS solution  immediately after cleaning it form the disulfides the content of mercaptides was higher by 30 ? 50% than at the entrance place of ACS in the extractor. This confirms the occurrence of the mercaptides  oxidation in the alkaline solution of ACS outside the regenerator (in the pipeline before the extractor).

Similar results using water-soluble homogeneous catalysts have been obtained in article [2]. In sweetened  to ? 5.0 ppmw by mercaptans propane and  butane fractions of Iranian Refineries total sulfur content found by the international standard EN 589-2008, was 50,0 ppmw. To reduce total sulfur content to ? 35,0 ppmw  these fractions were subjected to advanced adsorption  treatment using zeolites [2].

Due to the tightening of regulations on the sulfur content of automotive fuels to ? 50,0 ppmw Euro-4 and to ? 10,0 ppmw Euro-5 [3], as well as high-octane additives,  synthesized from liquefied gases, regeneration of alkaline solution is appropriate to maintain using heterogeneous catalyst, permanently fixed in regenerator.

For this purpose we have developed polymeric KSM catalyst that produced in the form of packed elements with an exposed surface. The active components of KSM catalyst are solidly supported on polymer, which excludes them from dissolving in the circulating alkaline solution and the formation of disulfides outside the regenerator  [4].

Experience at the refinery commercial operation  has shown the following significant advantages over its homogeneous-catalytic processes [5,6]:

1. Reduction of total sulfur in the purified product less than 10.0 ppmw by eliminating contamination of disulfides;

3. Sweetening units  environmental improvement  by reducing the volume of sulfur-alkaline waste, reducing the concentration of free alkali and getting an exception of heavy metals in waste water.

Thus, in BBF, sweetened from mercaptans by Demer-LUVS method at JSC “TAIF-NK”, mercaptan sulfur contents was 1,0 ? 5,0 ppmw, and total sulfur content – does not exceed 10,0 ppmw. Similar results were obtained in JSC “LUKOIL-NizhegorodNOS” the content of mercaptan sulfur in BF – less than 5,0 ppmw, and total sulfur found by the ANTEK device, less than 10,0 ppmw [7].

With the putting into operation hydrocracking refineries there were obtained  significant resources of desulfurized kerosene fractions. This makes the possibility of increasing the production of jet fuel due to the involvement of virgin kerosene fraction by manufacturing composite jet fuel TS-1 or Jet A-1. To involve the entire volume of virgin kerosene in the composite jet fuel  it is needed to sweetening it from mercaptan  sulfur content , which is 4 ? 10 times higher than normal, acceptable to jet fuel – 0.003 wt%.

In this context, becomes actual  the process of selective oxidation of corrosive  mercaptans into inert disulfides  in alkaline medium at 40 ? 60° C. Estimated capital cost of the Merichem Company for hydrotreatment of kerosene compared with  alkaline  sweetening is greater by 10 ? 20 times, and operating costs – 20 ? 50 times.

The main obstacle to widespread adoption of the known processes of alkaline  kerosene sweetening  using based on coal  catalysts  – is their  multistage  and  ecology  [8-10]. Because of the fragility of the adsorptional interaction of porous carbon with an alkaline solution of ACS occur its’ constant desorption from the coal carrier. This calls for  constant  feeding of coal and washing the fuel from the ACS, which leads to the formation of the multistage wastes at all stages of jet fuel purification (Fig. 2):

4. Bleaching clay purification from traces of ACS and cokes ? 95 tn./year to dump. 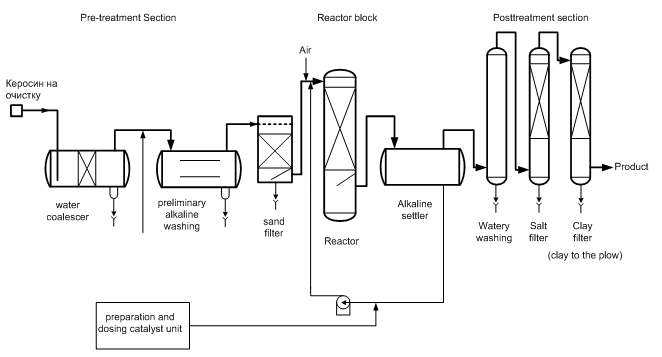 Instead, these processes, we propose two-stage low-waste regenerative “Demer-KSP”  kerosene  treatment process  using polymer KSM catalyst in presence of the promoter  that can quantitatively settle from kerosene for 60 ? 90 min [11 , 12]. In this case, together with sweetening, at the same time promoter is extracting  acidic impurities from kerosene, as well as part of the reaction and dissolved water, which are then picked out while promoter regeneration (Fig. 3).

Significant advantages of the “Demer-KSP” process using KSM catalyst and promoter compared  with listed above processes are:

1. Reduction of capital and operating costs for jet fuel sweetening due to the exclusion the following units:

Experimental batch of virgin kerosene, sweetened by pilot plant of the Moscow Refinery using “Demer-KSP” method [11], has successfully passed the qualification tests in VNIINP. With three major Refineries in Russia concluded license agreements for the implementation of this process. 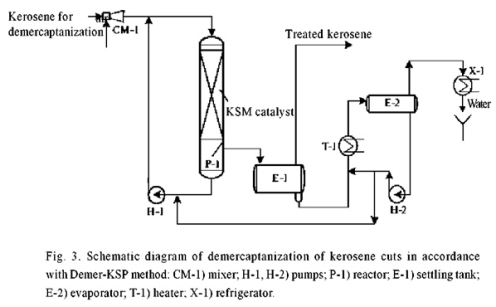 During the hydrotreatment of Astrakhan high mercaptan gas condensate was established [13] that the presence of mercaptans in the feed leads to  increase the frequency of regeneration. The reason is the intensive formation of coke deposits by the thermal decomposition of mercaptans with the polymerization products of their decomposition on the catalyst. The share of these products up to 60% by weight of coke deposits [13].

These data indicate the feasibility of pre-sweetening high mercaptan raw before hydrotreatment. This scheme is attractive in terms of reducing the corrosivity of the material in case of mercaptans removal  that causing intense corrosion of equipment in the heating zones  due to the mercaptans low threshold of thermal stability  at 140?1700C.

Table 1. The content of total and mercaptan sulfur in the oil and gas condensate depending on their location 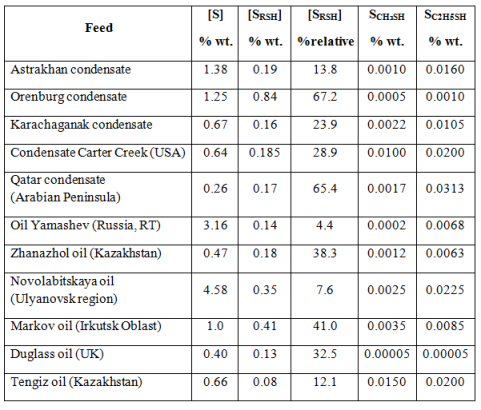 In nowadays processes of oxidative or extractive oil demercaptanization by ACS water-alkaline solutions [2, 14] is solving only the problem of deodorization by the oxidation of light C1-C2 mercaptans in oil to disulfides and to satisfy  GOST R51858-2002  requirements and provide acceptable terms of its transportation in Russian Federation or abroad. Thus formed disulfides remain in the oil, i.e. sulfur content in oil  is not changed (see Table 2).

Table 2 shows that in case of oil oxidation sweetening completely  oxidized  only methyl and ethyl mercaptans. Heavier propane thiol oxidized by 70% and butane thiol – 20%. The residual mercaptans  and disulfides formed remain in the oil, causing corrosion and formation of coke deposits   at the following high-temperature  hydrotreatment processing, because disulfides also have low thermal stability and decomposing into the mercaptans and hydrogen sulfide when heated above 200°C.

Table 2. The composition of sulfur compounds in the Tengiz oil before and after purification by oxidation sweetening [14]. 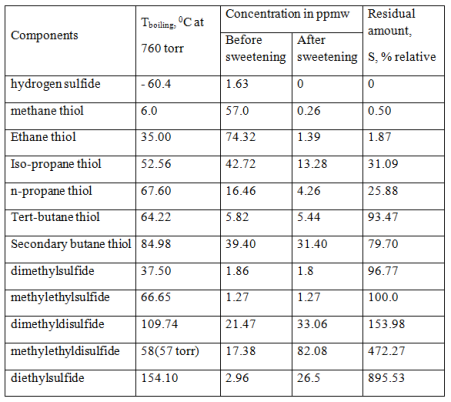 To facilitate the subsequent processing of high mercaptan gas condensates and  light oils and management of hydrocarbons’ contained natural mercaptans, we have developed “Demerus” process [12]. The distinguishing feature of Demerus is using of special extractant capable of removing mercaptans from a high-boiling hydrocarbons. Extractant settling time  from the purified gas condensate does not exceed 90 minutes. Aqueous alkaline solution under these conditions is not settled even for 300 minutes. (see table 3). 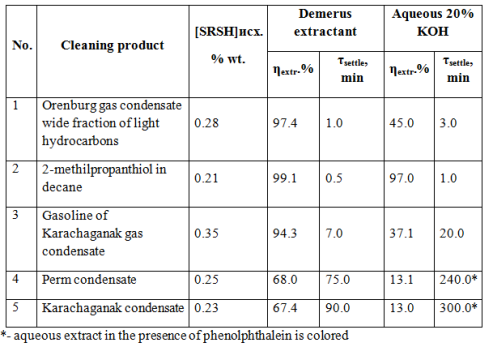 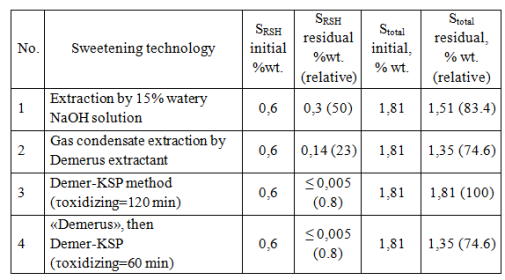 Extractant regeneration is carried out by oxidation of contained mercaptides  to disulfides using KSM catalyst (Fig. 4).

At the same time decided  important task of obtaining by high mercaptan raw disulfides – a valuable petrochemical product, that is an effective agent for sulfering catalysts of hydrogenation processes and an inhibitor of coke formation during pyrolysis of hydrocarbons.

Given the above, it seems appropriate  the following scheme treatment  of high mercaptan hydrocarbon raw:

2. Purification of stabilize gases from hydrogen sulfide with producing elemental sulfur by one of the known methods (MDEA or iron chelate complex), and the following “Demer-LUVS” technology for mercaptan removing (Fig. 1);

4. Fractionalization of sweetened gas condensate or oil with the following  hydrotreatment  of allocation fractions.

The essence of LOCOS process is oxidizing by atmospheric oxygen toxic sulfide  contained in the wastes to less harmful oxygen-containing compounds – thiosulfate and sodium sulfate or ammonium sulfate and mercaptides – to inert disulfides and further alkiltiosulfonates by the following reactions [15,16]:

Unlike the original sulfides and mercaptides formed thiosulfate, sodium  sulfate and alkiltiosulfonates do not have odor and have much higher limit values for plant’s  biological wastewater treatment. Limit values are easily achieved at the expense of the actual dilution of oxidized sulfur-alkaline waste with offsite runoff before it enters the  biofeedback.

LOCOS process is  taking place in the presence of the polymer KSM catalyst at 70?80° C and a pressure of 0.5 MPa. After the complete oxidation of toxic sulfide and mercaptides one part of the waste is returned to alkalization block  for using regenerated by the reaction alkali, and the other part of oxidized waste is sent to the site for neutralization before discharging it to the biofeedback (Fig. 5). 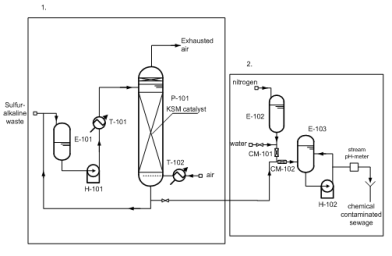 To reduce water consumption and to provide circulating water supply it is appropriate to provide for desalting oxidized and neutralized wastes by known methods such as reverse osmosis [15].

In contrast to the process of sulfur-alkaline waste water  carbonization  or liquid-phase oxidation method [17,18], LOCOS process does not require much heat and chemicals and does not pollute the air emissions of hydrogen sulfide or sulfur dioxide. The alkaline nature of the reaction medium and the relatively low temperature  of the process  allows to use apparatus made of carbon steel. The use of KSM catalyst in LOCOS process can significantly increase the efficiency of sulfur-alkaline waste decontamination in comparison with carbon fiber oxidation catalyst or noncatalytic method [16]:

1)  reduce the temperature and shorten the oxidation time of sulphides and  mercaptides  by air oxygen;

2)  provide a deeper oxidation of sulfur compounds and decrease chemical oxygen demand by about 75% ;

3) reduce the amount of toxic mercaptans in the exhaust air. 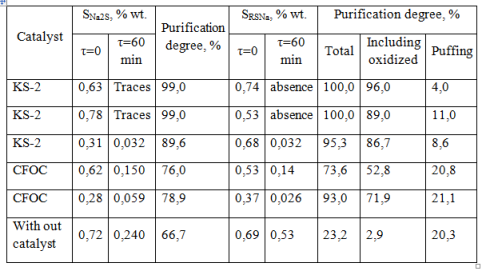 As shown in Table 5, CFOC is less effective in the oxidation of mercaptides in sulphur-alcaline waste water than KS-2. While using CFOC content of mercaptans in the exhaust air is three times more than in the presence of KS-2.

During decontamination of sulfides in aqueous process condensate in the  presence of CFOC catalyst, it is seen the formation of elemental sulfur. For this reason, at the Ryazan Refinery, where this catalyst is used [19], it was needed periodically  to purge the steam valve from sulfur deposits at the outlet of exhaust air from the reactor because of its pile. In sulfide decontamination units of aqueous  process condensate coming from catalytic cracking of Pavlodar, Mazeikiai, Omsk, Ufa  Refineries in the presence of KS-2 catalyst [16], the formation of elemental sulfur was not observed.

12. A. G. Akhmadullina and R. M. Akhmadullin. New developments and implementations in the field of hydrocarbon-stock desulfurization.. Chemistry and Technology of Fuels and Oils, 2008, Volume 44, Number 6, Pages 371-378

13. B.I. Belinskiy, V.M. Berdnikov and others. Hydrotreating of mercaptan containing condensate feedstock, Chemistry and Technology of Fuels and Oils, No.3, 2002, p. 8-10.

14. A.M. Mazgarov, A.F. Vildanov, Yu.P. Kopilov. Resources of mercaptan-containing crude oils and gas condensates, and peculiarities of their processing, Journal of the All-Russian Society of Chemistry by D.I. Mendeleev, р. 67-72, 2004.