At the enterprises of oil-refining and petrochemical industries, one of the main environmental problems associated with the disposal or recycling of contaminated sulphurous compounds of waste alkaline solutions and water technologic condensates (TC), components for sulfur-alkaline flow (SAF).

SAF are aqueous solutions of sodium salts of different concentrations: hydro-sulfides, sulphides, carbonates, mercaptides, sulfates, as well as sodium phenolates and water soluble or emulsified oil [1]. SAF are mainly neutralized by oxidation of toxic sulfuric compounds less toxic products of electrochemical method or by using the chemical oxidants [1, 2]. Of these methods, the most interesting is the oxidation of toxic sulfuric compounds oxygen due to its availability and low cost.

In the absence of catalysts for the oxidation of oxygen is carried out at a temperature of 90-110°C level and pressure of 0,3-0,5 MPa  [3]. The use of catalysts allows to accelerate oxidation. Catalytic activity in this process have of salt variable valence metal such as Ni, Mn, Cu, Co, Fe [4].

In the process of neutralization of SAF it is effectually to use heterogeneous catalysts, catalytically active components which are not carried away with the cleanable water and catalyst carrier is resistant to alkali and oil impurities contained in SAF. Catalysts series COP on polymer matrix [5, 6, 7] are liable for such requirements, proven in the industry, major catalytic component of which are expensive phthalocyanine metal with variable valence. Potentially active in reactions of oxidation and insoluble in water oxides of variable valence metals on a polymeric matrix is effectually to test for expansion of assortment, increasing of activity and reduction of the heterogeneous catalysts in catalytic removal of local SAF.

Industrial catalyst for desulfurization of COP-20 corresponded to 20% concentration of cobalt phthalocyanine in polyethylene. As polymeric media made of polythene of a high pressure KAZP?LEN mark 15313-003 GOST 16337-77. Heterogeneous catalyst was the cubes, dimensions 2?2?2 mm.

Experimental solutions were prepared by means of dilution of solid sodium hydrogen sulfide in water.

NaSN oxidation in aqueous solution was in a cylindrical bubbling reactor. Oxygen was delivered in jacketed of a given concentration of NaSN into the presence of the catalyst. Solution reactor stirred with a speed of 1400 turn/min.

The temperature of the reaction solution maintained at 60°C with using the temperature-controlled magnetic stirrers.

The initial rate of the reaction is determined by the angle of the tangent to the initial segment of the curve the disappearance of sodium hydrogen sulfide.

Our study of sodium hydrogen sulfide oxidation effectiveness in aqueous solution in the presence of transition metal oxides are applied on the polymeric matrix, shown in Figure 1. 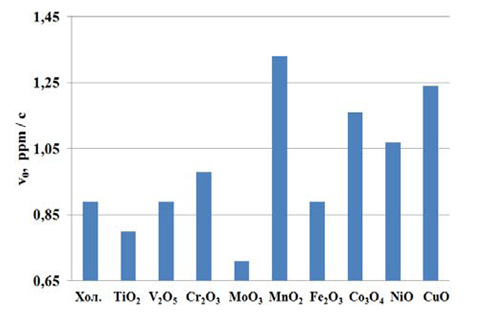 Fig. 1 The influence of nature of metal oxides on a polymeric matrix on initial oxidation rate (?0) sodium hydrogen sulfide

Maximum activity in the oxidation of sodium hydrogen sulfide solutions oxygen are catalysts with MnO2 and CuO, in the presence of initial oxidation rate of sodium hydrogen sulfide in 1.6 and 1.8 times higher (fig. 1) compared with the blank experience. Catalysts based on metal oxides of variable valence: NiO, Cr2O3, Co3O4-have little activity, part of oxide, such as V2O5 tested, Fe2O3-does not affect the rate of oxidation of sodium and hydrogen sulfide catalysts based on TiO2 and MoO3 – even inhibit the oxidation of NaSH. The results are consistent with the theory of double-phased oxidation and restorative mechanism proposed by P. Mars and D. Krevelin [9]. According to this theory, the speed of the catalytic reaction is influenced by 2 factors:

The activity of metal oxides is located in the following order [10]:

2. the rate of formation of oxygen ? ? ? catalyst (Kat ? ? ? o), depends on the rate of oxygen adsorption on the surface of oxides:

In this case, a number of economies in transition metal oxides activity located in following sequence [11]:

Demonstration of the high activity of manganese oxide (IV) sodium hydrogen sulfide oxidation reactions (Figure 1) can be attributed to its contribution as an oxidizer in the beginning of the reaction and as a catalyst for the reaction of [12]. Indirectly, this is confirmed by the fact that the catalyst is based on MnO2 greatly increases the speed of oxidation of NaSH in the initial period of reaction (during the first 30 min.), while in the presence of compositions with CuO oxidation rate of sodium hydrogen sulfide remains constant in time.

Based on the maximum activity of the catalysts with copper (II) oxide and manganese oxide (IV) performed a study on selection of the optimal ratio of active oxides of CuO, MnO2 in mixed composition with each other within the polymer matrix. The maximum concentration of catalytic components in the polymer matrix was 20%. Test results are presented in Figure 2.

Comparison of catalytic activity of famous catalyst RS-20, major catalytic component of which is a 20% concentrate of cobalt phthalocyanine in polymer showed that accelerant MnO2-5/CuO-15 has higher activity (?0 = 1.635 ppm/c) sodium hydrogen sulfide oxidation in comparison with the famous cat COP-20 (?0 = 1.35 ppm/c).

Study of oxidation of NaSH in the presence of heterogeneous catalyst based on copper and manganese oxides.

Study of influence catalytic component concentrations of oxides of manganese and copper (with a ratio of MnO2: CuO = 1:3) in polymer matrix shows that with its increased sodium hydrogen sulfide oxidation reaction speed is in the range of 0 to 15%. Further increases in concentrations of oxides does not affect the rate of oxidation of NaSH that involve, apparently, with the saturation of the geometric surface of catalyst active centers.

The lack of increase in reaction rate with increasing amounts of catalyst, apparently due to the limitation of hydrodynamics of mixing in the reactor.

Fig. 3 The dependence of initial velocities of oxidation (?0) from weight-5/MnO2 catalyst CuO-15 in the reaction mixture

In the absence of a catalyst increase the temperature and pressure increases the speed and depth of the oxidation of sulphides and hydrosulfides without changing the reaction mechanism [13]. Study of influence of temperature on oxidation rate of sodium hydrogen sulfide in the presence of catalyst MnO2-5/CuO-15 shows, that the maximum speed of NaSH oxidation is when temperature is 60°C, above which the oxidation rate NaSH dropping that, apparently, due to the decrease in the solubility of oxygen in water with increasing temperature. Determining oxidation NaSH on oxygen in the presence of catalyst MnO2-5/CuO-15 differential method showed a first order reaction (fig. 4).

When study on the hydrosulfides reaction of sodium, it was found that the initial reaction rate depends on the concentration of the original NaSH. The data presented indicate a zero-order reaction.

The results (first order reaction on oxygen, the zero order NaSH) show that the efficiency of oxidation catalyst is not dependent on the concentration of NaSH, and will increase with the increase of oxygen concentration in gas. Thus, sodium hydrogen sulfide oxidation reaction limited solubility of oxygen in water environment, the number of active points on the surface of the catalyst and the quantity (surface) catalyst.

Fig. 6 The logarithmic dependence of the speed of the catalytic oxidation of NaSH from the concentration of O2 in the presence of catalyst MnO2-5/CuO-15 at 60°C

On the basis of the presented data suggest the following reaction mechanism of the oxidation of sulfur compounds:

the first two stages going at high speed, as evidenced by zero order reaction source sulphurous compounds. Stage (3) runs from proven authors [14, 15] electronic transmission between copper and manganese cations in a mixture of the oxides MnO2 single-phase/CuO. In connection with this, there seems to be a manifestation of the synergistic effect of mixed catalyst activity (see Figure 2). Sunset stage IV (4) the first order is to activate oxygen and oxidation of copper ion.

5. Akhmadullina, A.G. about new developments and deployments in the desulfurization of hydrocarbon raw materials/A.G. Akhmadullina, R.M. Akhmadullin//chemistry and technology of fuels and oils. 2008. vol. 44. No. 6.