In this article a new approach for polyquinone synthesis is proposed: polymerization of hydroquinone or 1,4-benzoquinone by dehydrogenating agent 3,3ʹ,5,5ʹ-tetra-tert-butyl-4,4ʹ-diphenoquinone. Interest to this reaction is emerged from the knowledge of products may have a widespread application, polyquinone due to its π-conjugated structure with redox-active chains and 4,4ʹ-bis(2,6-di-tert-butylphenol) due to good stabilizing efficiency in polymers. The obtained polyquinone was characterized by spectroscopic, elemental, NMR, EPR and GPC methods and its polymerized nature was proved.

This Article in PDF

Nowadays π-conjugated polymers attract considerable attention due to their specific electrical and optical properties that afford them a possibility to be used in contemporary devices. Polymers of this type may consist of active redox chains, [1,2] and for instance quinones and hydroquinones are one of the typical redox-active compounds used as precursors for π-conjugated polymers production. [3,4] 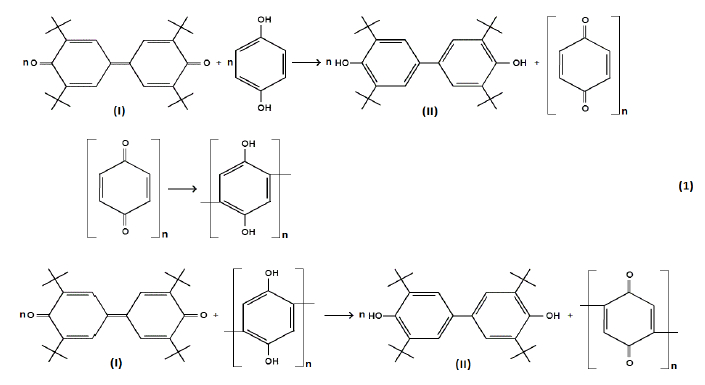 Practical interest to this reaction, apart from the redox-active properties of polyquinone, emerges from the fact that bisphenol (II) may be used as effective phenol-type antioxidant for stabilization of rubbers [14,15] and polyolefins. [16-20]

After the reaction termination reactor was cooled down to 80⁰C. The upper part of reaction mass – hydrocarbon phase, was separated from lower aqueous phase. Afterwards polyquinone suspension in water was filtered and washed with distilled water, then with toluene.

Model experiment of direct dehydration of water by diphenoquinone (I).

Reaction was carried out in the following conditions: 50.0 ml of toluene, 0.0123 moles of diphenoquinone (I), 25.0 ml of distilled water, and 3.0 grams of sodium sulphite were loaded into autoclave, mixture was heated up to 200⁰C and mixed with magnetic stirrer at 1400 rpm. Reaction time was 10.5 hours and was controlled by diphenoquinone (I) depletion.

Diphenoquinone (I) concentration was measured by light absorption of reaction solutions by colorimeter Ekros PE5300V at wavelength 540 nm.

Component analysis of reaction mixture was carried out on gas chromatograph Chromatek-Crystall 5000.

Structure identification of the acquired polyquinone was done on FTIR spectrometer InfraLUM FT-08.

Elemental analysis of polyquinone was carried out on elemental analyzer Elementar Vario Elcube CHNS-O, katharometer (thermal conductivity detector) was used as a detector and helium was used as a host gas with consumption of 250.0 ml per minute.

NMR spectra of bisphenol (II) 1H at 600.15 MHz was measured on the high-resolution Bruker spectrometer AVANCE 600 in the CDCl3 solution.

Chromatography-mass spectroscopic analysis of toluene was done on gas chromatograph Maestro GC 7820. Ionization was done by electronic ionization with temperature of the ion source 220⁰C. Capillary column SLB-5ms Supelco was used, length 30 m, diameter 0.32 mm, width of the phase layer 0.32 micron. Helium was used as host gas. Injector temperature is 280⁰C, helium flow rate through the column is 1.42 ml/min, and flow fraction is 1:3. Initial temperature of the column is 80⁰C (2 minutes). The heating rate is 10⁰C/min, end temperature 280⁰C.
For the structure determination of paramagnetic centers in a precursor 1,4-benzoquinone and possibly polymerized product (called hereafter as polyquinone) CW, ESE experiments and pulsed ENDOR experiments were carried out using Bruker Elexsys E580 spectrometer operating at microwave frequency 9.7 GHz. CW mode measurements were done at mW power of 2 mW with modulation frequency 100 kHz and modulation amplitude of 2G. Pulsed field-swept echo-detected EPR experiments were conducted using standard Hahn echo sequence π/2-τ-π-τ-echo with π/2 length of 12 or 100 ns and interpulse distance τ of 240 or 400 ns. The ENDOR spectra were recorded using either Mims sequence π/2-τ-π/2-T-π/2-τ-echo or Davies sequence π-T-π/2-τ-π-τ-echo with RF pulse of 16 μs inserted in the time interval T. All experiments were carried out in the wide temperature range from 20 to 300 K using helium flow cryostat manufactured by Oxford Instruments. Optical illumination were provided through the quartz window in the sidewall of the cryostat, light source was mercury UV-lamp manufactured by LOT-Oriel with broad spectrum. The infrared part of spectrum was filtered out using distilled water filter.

The main purpose of this work is the study of polymerization reaction of 1,4-benzoquinone and hydroquinone in the water-toluene medium with the diphenoquinone (I) as a dehydrating agent.

The reaction mass was characterized by gas chromatography before and after polymerization. It is shown molar ratios of reduced amount of diphenoquinone (I) and produced bisphenol (II) were equal (TABLE 1).

According to mentioned above assumption has been made that diphenoquinone (I) is able to dehydrate not only monomer (hydroquinone or 1,4-benzoquinone) but water that presents in the reaction mixture. The water involvement in reaction was additionally confirmed by the fact that without water polymer products were not detected. For the additional proof of this assumption the polymerization of 1,4-benzoquinone or hydroquinone was carried out in the deuterated water. The comparative analysis of the 1H NMR spectra was made for bisphenol (II) produced with D₂O and H₂O (see FIG. 1). Chemical shifts of 1H nuclei correspond to the following groups: 1.49 ppm – hydrogen in t-butyl group, 5.17 ppm – hydroxyl group, 7.31 ppm – benzene ring. Registered values of signal intensity are relative values with respect to the intensity of the hydroxyl group, which is taken as a constant. Thus, in FIGURE 1, the intensity of protons of t-butyl group and benzene ring in bisphenol (II) obtained with D2O comparing with H2O increased 2.2 times (41.0/18.4 = 2.2, 4.5/2.0 = 2.2), despite the fact the amount of hydrogen in these groups remain unchanged during the reaction (1). This implies the 2.2 times reduce of intensity of the protons in the hydroxyl group: 1/2.2 = 0.45, (1-0.45)x100% = 55%. Therefore, 1H NMR spectra showed a protons’ substitution of approximately 55% of bisphenol (II) for deuterium (see FIG. 1). 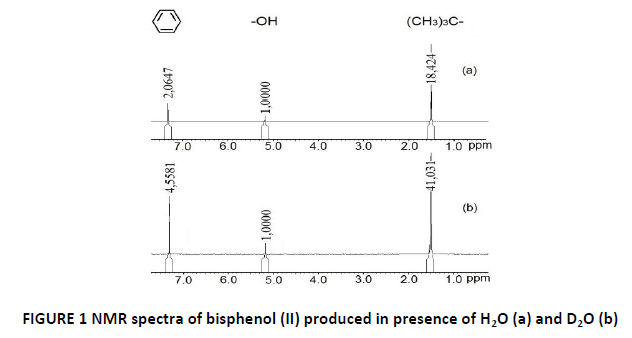 For the final proof of the possibility of direct dehydration of water by diphenoquinone (I) the model reaction was carried out with sodium sulphite used as an absorption medium for atomic oxygen that is produced during the reaction (reaction 2). The amount of diphenoquinone (I) has been decreased by 54.8% for 10.5 hours of reaction.

Elemental analysis of the polyquinone samples is presented in TABLE 2. Small excess of the hydrogen and oxygen in polyquinone can be explained by the probability of additional hydroxylsʹ formation in the side position of polyquinone end group and by the presence of the certain amount of hydroxyl groups in the polymer chain confirmed by IR-spectroscopy (FIG. 2). 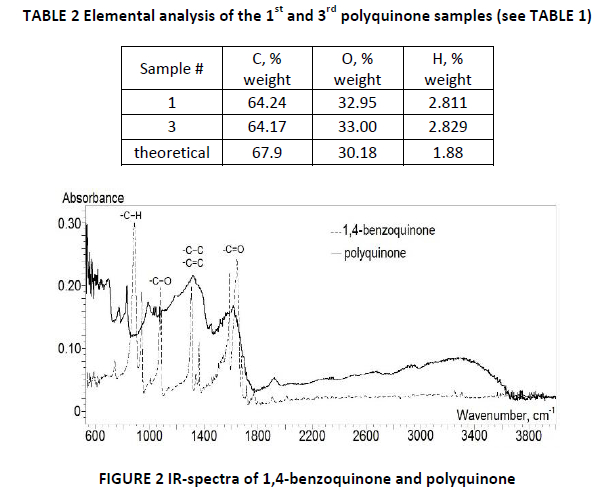 The reason for non-stoichiometric ratio of components – the situation when one mole of 1,4-benzoquinone could reduce up to three moles and hydroquinone up to four moles of diphenoquinone (I) – is the parallel oxidation of the toluene to benzaldehyde (16.4 minutes) and benzyl alcohol (20.5 minutes) shown by chromatography-mass spectroscopy studies of toluene before and after the polymerization (FIG. 3). 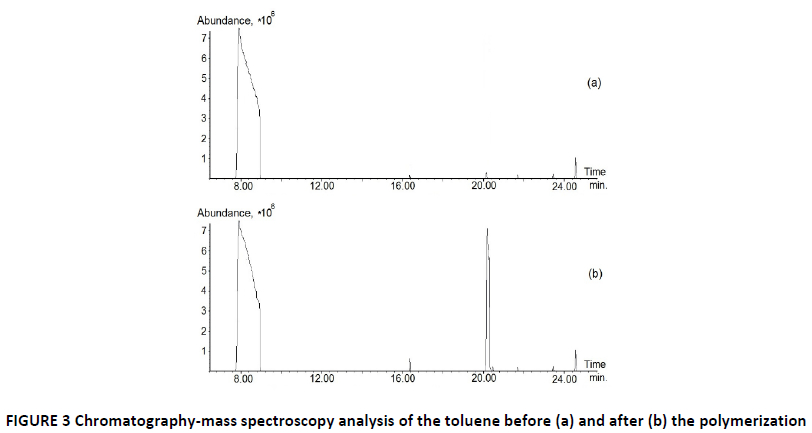 The NMR spectroscopy experiments confirmed previously suggested structure of the polymerized substance. The NMR 1H CP/MAS spectra at different spinning rate are shown in the figure below (FIG. 4). The signal is a combination of three lines. The central more intense peak at 170 ppm corresponds to the 1H nuclei of the C-H group in the cyclohexadiene ring of polyquinone at the positions 2 and 5 (see FIG. 1). The large intensity of this line can be explained by the presence of the hydrogen atoms near to 2, 5-carbon atoms that doubles the intensity in the case of broadband excitation on the proton NMR frequency. Two less intense peaks at the 150 and 180 ppm are related to the 1, 4 and 3, 6 positions respectively. This could be probably explained by the presence of proton in the ring end-groups of polyquinone at the 3, 6 positions of carbon atom, and by the presence of the certain amount of hydroxyl groups in the polymer chain at 1, 4 positions, that are also confirmed by IR-spectroscopy (see FIG. 2).

We studied polymerized substance (lightweight black powder) and initial 1,4-benzoquinone in solid-state (yellow needles). CW and pulsed EPR spectra were obtained, with and without light illumination at 20 K temperature.

There is almost no dark signal whereas EPR signal under illumination is pronounced and typical for the systems with charge-separated state [21] (FIG. 5 and 6(a)). The approximation is not very good, although for electron spin echo-detected EPR the same approximation works fine. 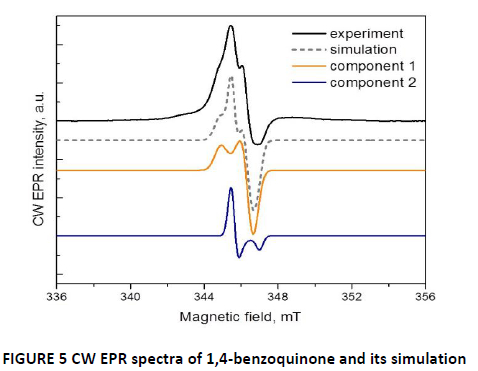 The result of approximation is two paramagnetic centers with axial g-factors that according to charge-separation process could be assigned to positively (component 1) and negatively (component 2) charged states of 1,4-benzoquinone radical. [22] The precise assignment is not discussed here and is the matter of the future work. In order to determine nuclear surrounding of the paramagnetic centers, ENDOR experiments were carried out (FIG. 6(b)).

ENDOR spectra were taken at three field values in the three characteristic point of the ESE spectra, corresponding field values are indicated by arrows. Similarities in the ENDOR spectra could tell us that EPR signal indeed comprises (mainly) two types of paramagnetic centers with one of the possible origin as the positively and negatively charged radical of 1,4-benzoquinone.[22] The important thing about ENDOR spectra that should be mentioned is distinct, well-resolved interaction with groups of protons. This picture is an additional indication that we are dealing with well-defined paramagnetic center of certain size and electron density and distance between electron and proton is more or less the same throughout whole ensemble of the paramagnetic particles.

The polymerized product was studied by CW and pulsed EPR spectroscopy, at temperature of 20 K (FIG. 7 and 8(a)). Additionally ENDOR spectra were taken at specific points of EPR spectrum to measure and characterize hyperfine interaction with surrounding hydrogen nuclei (FIG. 8(b)).

Simulation of CW spectra was made in the assumption of asymmetric g-factor with two component, g┴ = 2.0075; g□ = 2.0043. ESE spectrum of polyquinone clearly shows an asymmetrical line that additionally confirms axial symmetry of electron g-factor (FIG. 7). 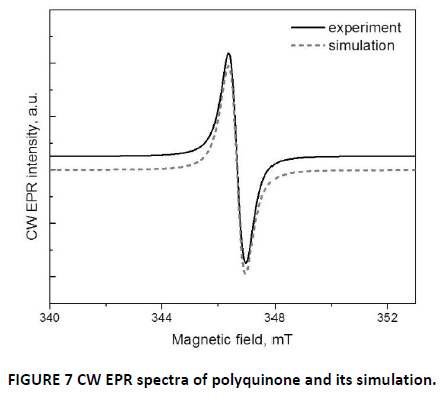 For the same reason as we did with 1,4-benzoquinone, ENDOR spectra were taken in two field position marked gpar and gperp correspondingly. The ESE and ENDOR spectra are presented in FIGURE 7 and FIGURE 8. 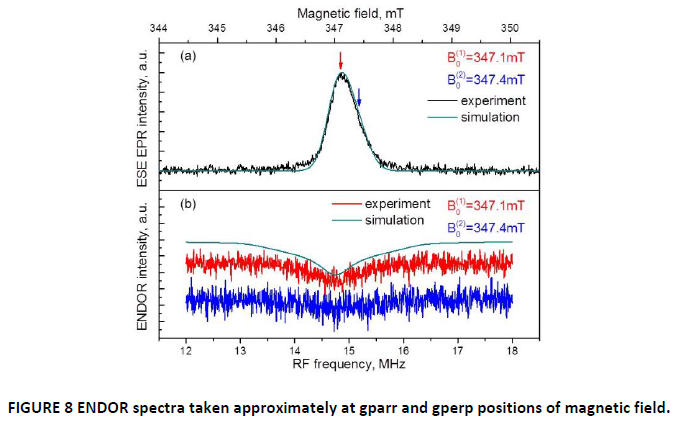 One of the characteristic properties of polymer is the length of its chains, and ENDOR spectroscopy has proved to be one of the tools to determine this length. [21] In our case it is seen clearly the smoothed featureless ENDOR spectrum from polymerized quinone in contrast with well-resolved lines of 1,4-benzoquinone. That could be explained as follows. The resolved signal with distinct peak marked an interaction determined precisely (in the limit of linewidth) that assigned to the paramagnetic center with reasonably defined sizes – in our case, to the one ring of 1,4-benzoquinone radical. On the other hand, the featureless signal arised from the set of hyperfine interactions that corresponds to the number of distances between paramagnetic centers and surrounding nuclei. The linewidths of the ENDOR signal in FIGURE 8b is about 1.34 MHz that could be interpret by the dipole-dipole interaction to about 0.38 nm.

A novel approach of polyquinone producing was applied by polymerization by dehydrogenation of hydroquinone or 1,4-benzoquinone by diphenoquinone (I) in the water-toluene solution.

The possibility of dehydrogenation of water by diphenoquinone (I) was established.

During polymerization reaction the oxidation of toluene to benzaldehyde or benzyl alcohol was confirmed by chromatography-mass spectrometry.

The obtained product was characterized by spectroscopic, elemental, NMR, EPR and GPC methods and its polymerized nature was proved.