Synthesis and Properties of Oxide Catalysts

SYNTHESIS AND PROPERTIES OF OXIDE CATALYSTS FOR HINDERED PHENOLS OXIDATION

Here provided a new method of heterogeneous alkaline catalyst production for a sterically hindered phenols oxidation, catalyst production using metal oxide of the 4th period of the periodic table. The composition of the proposed heterogeneous alkaline catalyst was studied. Kinetic laws of the oxidation reaction of 2,6-di-tert-butylphenol were studied as well.

Ensuring the production of synthetic rubber and polyolefins with antioxidants, development of non-waste methods of their production and improvement of ecological component of both the antioxidants and their production technology are urgent scientific and technical tasks. Great theoretical and practical interest for these positions presents the antioxidant 3,3′,5,5′-tetra-tert-butyl-4,4′-diphenoquinone [1, 2]. Available raw material for production is 2,6-di-tert-butylphenol received at JSC Sterlitamakskiy petrochemical plant.

In order to enhance the catalytic activity of the heterogeneous alkaline catalyst for oxidation of 2,6-di-tert-butylphenol proposed in [3, 4], was studied the possibility of using metal oxides of the 4th period of the periodic table, which are known to be widely used as a catalysts for the oxidation-reduction reactions in organic synthesis [5].

1. Synthesis of heterogeneous alkaline catalyst based on metal oxides (hereinafter HAСMe). 1.0 g of solid sodium hydroxide and 0.1 g of metal oxide in 50 ml of decane was loaded into the reactor and stirred with a magnetic stirrer, increasing the temperature of the solution to a given value (above 100°C). Upon reaching the desired temperature of the solution into the reactor was injected 0.5 g of 2,6-di-tert-butylphenol (monophenol I) and the reaction was stirred for at least 30 minutes. Released during the reaction water is diverted through the sampling hole. The received catalyst was stored in a layer of hydrocarbon solvent. The size of HACMe catalyst particle was determined by transmission electron microscopy.

2. The experiment. A cylindrical bubbler type reactor was loaded with 50.0 ml of toluene and 1.0 g of the HACMe catalyst. Upon reaching the desired temperature (90°C) 0.5 mol (5.0 g) of monophenol I was added to the reactor and then was supplied oxygen at a rate of 15.0 l/h. The  rotation speed of the stirrer was 1400 r/min.

Construction of kinetic curves carried out using data from the determination of 3,3′,5,5′-tetra-tert-butyl-4,4′-diphenoquinone (diphenoquinone II) at samples by photocolorimetric method.

Upon completion of the experiment consistently  has turned down the supply of oxygen and has switched off the magnetic stirrer with heating. After complete precipitation of the catalyst particles hydrocarbon phase is separated from the heterogeneous HACMe catalyst by decantation at a temperature above 70°C. The complete precipitation of the HACMe catalyst was followed by the color HACnge of aqueous extract of toluene in the presence of phenolphthalein. Hydrocarbon layer was cooled to the room temperature, the precipitated diphenoquinone II was filtered and dried in air.

The following chemicals used  for work:

Composition and preparation method of the heterogeneous HACTi catalyst developed in work [4] ensure its stable high activity in the oxidation of 2,6-di-tert-butylphenol by molecular oxygen and resistance to moisture. The binding agent in the HACTi catalyst – titanium dioxide is a metal oxide of variable valence belonging to d0 elements of the 4th period of the periodic table, which has a low catalytic activity in the oxidation-reduction type reactions.

According to the crystal field theory and the ligand field theory [5] arise simple relations between the catalytic activity and the d-electron configuration of cation, attractive for an experimenter. Consideration of a large number of reactions with catalysts – using transition metals oxides as catalysts – showed that two-peak pattern HACnge of catalytic activity of d-elements oxides of the 4th period of the periodic table is confirmed for a large number of oxidation-reduction reactions with its highs in configurations d3 (Cr2O3, MnO2) and d6-d8 (Co3O4, NiO1+x) and minimums in the case of configurations d0 (CaO, Sc2O3, TiO2), d5 (Fe2O3, MnO) and d10 (Cu2O, ZnO).

Injection of metal oxides of d-elements of the 4th period of the periodic table to the HAC catalyst has confirmed dependence of two-peak pattern HACnges in the activity of HAC catalysts in the oxidation of monophenols I to diphenoquinone II on the nature of metal (Fig. 1).

From Fig. 1 we see that the maximum activity in the oxidation of phenols appears in the case of modification of HACMe with d6-d9 elements (cobalt oxide Co3O4 and copper oxide CuO). The second peak appears in the case of d3-element (chromium oxide Cr2O3), that is to say the activity of d3 and d6-9 systems were higher than that of TiO2 d0 configuration, which is consistent with the above crystal field theory.

The rate constant of the oxidation reaction of monophenol I in the presence of the most active catalyst HACCo 1.7 times higher than that in comparison with the HACTi catalyst [4], other things being equal.

Studying of the surface composition of the HACCo catalyst samples using scanning electron microscope with phase elemental analysis of surface showed (Table 1) that the surface of the HACCo catalyst includes following composition of key elements: carbon from 4.17 to 41.26 wt%., sodium from 11.80 to 43.43 wt%., oxygen from 19.80 to 46.88 wt%. and cobalt from 0.36 to 62.01 wt%. Presence of hydrocarbon layer on the surface of the catalyst is confirmed by presence of carbon on it. High sodium content on a surface of heterogeneous catalyst in the HACCo samples (from 11.80 to 43.43% wt.) suggests a large spread in filling the surface layer of the catalyst with hydrophobic components. Places of a congestion of cobalt oxide are HACracterized by bright glow on the pictures.

Fig. 1. Effect of metal oxide (Me) nature in the HAC catalyst on the oxidation rate of monophenol I

Table 1. Elemental analysis of the surface layer composition of the HACCo catalyst 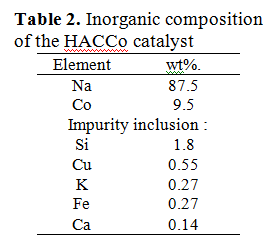 The composition of inorganic compounds on the HACCo catalyst surface was additionally studied using X-ray fluorescence method analysis, which also confirmed the presence of sodium and cobalt in the studied catalyst sample (Table 2).

Thus, this study has confirmed the high activity of Co3O4 in HAC catalyst in the oxidation of monophenol I comparing to other 4d elements of the periodic table and has showed the composition of the surface of heterogeneous HACCo catalyst.

Then were studied kinetics of the oxidation reaction of monophenol I in the presence of HACCo as a catalyst for diphenoquinone II synthesis.

Studying the effect of concentration of cobalt oxide in the HACCo catalyst on its effectiveness in oxidation of monophenol I showed extreme (a hyperbolic) HACracter of received dependence (Fig. 2), which implies that the optimal amount of cobalt oxide in HACCo ranges from 7.0 to 12.0% by weight.

At concentrations of cobalt oxide in HACCo below 7.0 wt%. and above 12.0 wt% seen a sharp decline in the catalytic activity of the modified catalyst.

Fig. 2. The dependence of monophenol I oxidation rate on the concentration of  Co3O4 in the HACCo catalyst

Kinetic curves of diphenoquinone II synthesis at different initial concentrations of monophenol I are shown in Fig. 3. Determination of concentrational order of reaction by differential method showed first-order reaction with respect to the initial monophenol I (Fig. 4). 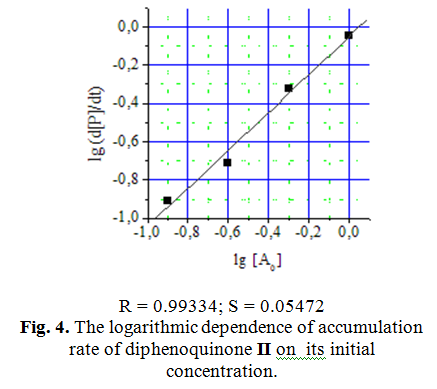 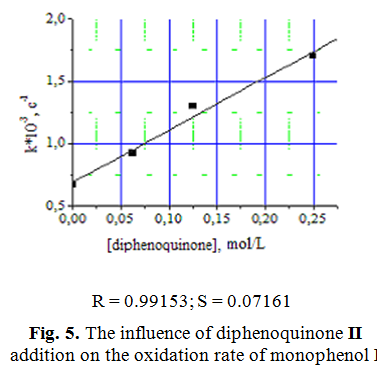 Monophenol I oxidation curves are not linearized [6] in semilogarithmic coordinates, what indicates the influence of the reaction product diphenoquinone II on the oxidation rate of initial phenol.

Studying of the effect of diphenoquinone II on the oxidation of monophenol I confirmed its accelerating effect, HACracteristic for autocatalytic type reactions (Fig. 5).

The results of research on the selection of the required amount of HACCo catalyst in the oxidation of monophenol I showed direct proportional dependence of diphenoquinone II yield on its amount. The dependence of the oxidation rate of monophenol I on concentration of HACCo catalyst is well described by a straight line indicating a first order reaction with respect to the catalyst.

Investigation of temperature effect on the conversion of monophenol I showed necessity of the process to be done in the temperature range from 90 to 95 ° C (Fig. 6). 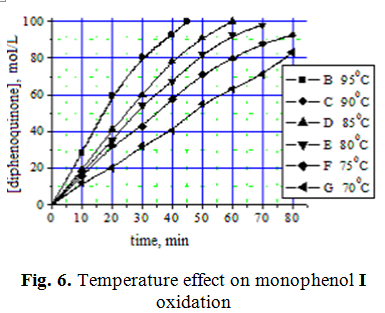 According to data presented in Fig. 6 of monophenol I conversion HACnge depending on temperature were calculated rate constants at different temperatures (Table 3), and then on the basis of lgk depending on 1/T was calculated activation energy for this reaction in the presence of HACCo catalyst.

1. According to the crystal-field theory were confirmed the activity of d3 (chromium oxide Cr2O3) and d6-9 (Co3O4 cobalt oxide and copper oxide CuO) systems in the oxidation of 2,6-di-tert-butylphenol. The maximum catalytic activity observed in the case of modification of HAC catalyst by cobalt oxide.

2. The optimal concentration of cobalt oxide in heterogeneous alkaline catalyst based on metal oxides (HACCo) was detected. Was confirmed autocatalytic HACracter of the reaction. It is shown that the oxidation of 2,6-di-tert-butylphenol (I) to 3,3′,5,5′-tetra-tert-butyl-4, 4′-diphenoquinone in the presence of HACCo catalyst proceeds according to first-order reaction, both the initial reagent and the catalyst. The main kinetic parameters were calculated for the oxidation reaction of monophenol I, necessary for the subsequent selection of the optimal process parameters.