Ensuring the independence of the domestic production of synthetic rubber and polyolefins on imports of antioxidants, development of waste-free methods of their production and improvement of ecological component of both the antioxidants and their production technology – are important and relevant scientific and technical tasks. Antioxidant 3,3?,5,5?-tetra-tert-butyl-4,4?-diphenoquinone [1] is of great theoretical and practical interest for these positions, available raw material for the production of which is 2,6-di-tert-butylphenol produced by JSC Sterlitamak Petrochemical Plant.

In order to improve the heterogeneous alkaline catalyst (HAC) proposed in article [2]  for oxidation of 2,6-di-tert-butylphenol it was necessary to find a way to improve its strength characteristics, providing a stable precipitation and constant volume in a hydrocarbon medium.

1,0 g of solid sodium hydroxide and 0.1 g of metal oxide in 50 ml of decane was loaded into the reactor and stirred with a magnetic stirrer, increasing the temperature of the solution to a given value (above 1000 С). Upon reaching the desired temperature of the solution into the reactor was injected 0.5 g of 2,6-di-tert-butylphenol (monophenol (I)) and the reaction mass was stirred for at least 30 minutes. The water released during the reaction is diverted through the sampling hole. Received catalyst was stored in a layer of hydrocarbon solvent. The catalyst HACTi particle size was determined by transmission electron microscopy method.

Construction of kinetic curves carried out according to the determination of amount of 3,3?, 5,5?-tetra-tert-butyl-4,4?-diphenoquinone (diphenoquinone (II)) in samples by photocolorimetric method. At the end of the experiment consistently there were switched off the oxygen supply and magnetic stirrer with heating. After complete precipitation of the catalyst particles hydrocarbon phase at temperature unless than 700С is separated by decantation from the heterogeneous catalyst HACTi. The complete precipitation of the catalyst watched by the color change of the aqueous extract from toluene in the presence of phenolphthalein. Hydrocarbon layer was cooled to room temperature, the precipitated diphenoquinone (II) was filtered and dried in air.

The same heterogeneous catalyst HACTi was used in all subsequent experiments and washed with toluene and dried in air before each experiment.

Following chemicals are used for work:

The initial reaction rate was determined from the slope of the tangent to the initial segment of the curve of accumulation of diphenoquinone (II).

It is known from the literature [3], that the titanium dioxide by reacting with sodium hydroxide, according to reaction 1 we can form on the surface of the solid alkali strong foil of  metatitanate sodium which is not soluble in water and hydrocarbons:

On this basis, it can be assumed that the pretreatment of solid sodium hydroxide particles by titanium dioxide, could enhance the catalyst particles HAC with carcass foil of formed metatitanate sodium as on scheme 1.

Considering the above, in order to improve the physical and mechanical properties of the catalyst HAC particles in its composition was put binder-titanium dioxide in powder form.

Carrying out of model experiment on the oxidation of monophenol (I) in the presence of 5.0 g of sodium metatitanate (product of reaction of titanium dioxide with a surface layer of solid sodium hydroxide) for 300.0 minutes showed formation of diphenoquinone (II) in an amount of less than 0.1% RH. 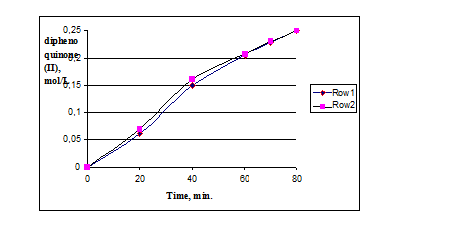 Pic. 1: Oxidation of monophenol (I) in the presence of catalysts HAC and HACTi,

At the same time modifying the structure of the HAC by titanium dioxide led to a significant improvement of particle precipitation of the catalyst HACTi out of the hydrocarbon reaction solution, led to the stabilization of its original volume and catalytic activity in multiple use (Table 1).

In table 1 there are showed the results of operability testing of the catalytic system for 19 cycles of oxidation of monophenol (I). 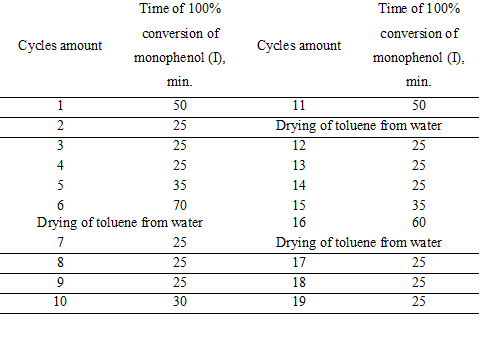 All experiments were performed in the same solution of toluene. At the end of each experiment the solution reaction was settled out of the heterogeneous catalyst HACTi and separated from it by decanting. The hydrocarbon phase was cooled to room temperature, the crystallized diphenoquinone (II) was filtered off and the toluene filtrate with residues of dissolved diphenoquinone (II) returned into the reactor with a catalyst HACTi.

Experiments have shown (Table 1) that the reaction water formed during oxidation of monophenols (I), is not absorbed by the catalyst HACTi but accumulates in toluene. The catalyst HACTi does not deliquesce while toluene saturated with moisture. Unlike the unshielded solid sodium hydroxide it retains its original form, which is a practical proof of the effectiveness of protective hydrophobic layer of phenolate and reinforcing layer foil of metatitanate sodium on the surface of particles of solid sodium hydroxide within the modified catalyst HACTi.

Table 1 shows that when reaching the critical concentration of water in toluene oxidation rate of monophenol (I) is reduced by moisture that has accumulated in the solvent. After distillation of the reaction water from toluene the catalyst HACTi activity is fully restored.

Modified by titanium dioxide catalyst HACTi is a polydisperse solid particles of brown color with size from 150 nm to 1300 nm and a density of 2.0 – 2.5 g/cm3. According to published data for particles with a diameter less than 100.0 microns to which the analyzed catalyst  HACTi applies in most cases implemented kinetic region of the reaction, and the inner surface of heterogeneous catalysts used entirely. [4].

Thus, with the experimentally chosen method it was established that for surface hydrophobization of 1.0 g of the catalyst HACTi needed in average 0.035 g of monophenol (I) (Tabl 2).

Additional study of the hydrophobic hydrocarbon layer of the HACTi catalyst samples was carried out using a scanning electron microscope with phase elemental analysis of the surface composition.

So from Table 3, the surface of the catalyst HACTi includes the following composition of the main elements: carbon from 13.72 to 43.15% by weight, sodium from 1.89 to 16.33% by weight, oxygen from 43.53 to 44.27% by weight and titanium from 0.18 to 23.48% by weight. The presence of carbon on the surface indicates the presence of the hydrocarbon layer on it. The sodium content on the surface of a heterogeneous catalyst HACTi is from 1.89 to 16.33 wt%, which is lower than in the catalyst HAC (from 9.41 to 42.50 wt%). This indicates a more complete filling of the surface of solid sodium hydroxide in HACTi with hydrophobic layer, which includes both organic component in the form of sodium phenolate and inorganic component – as a foil of metatitanate sodium and unreacted titanium dioxide, than in HAC.

Table 3. Elemental analysis of the composition of the surface layer of the catalyst HACTi 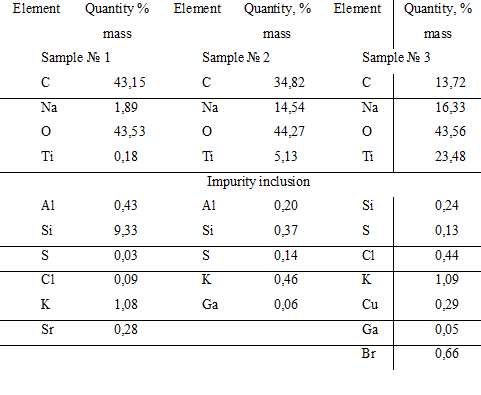 Thus, the developed composition and method of preparation of a heterogeneous catalyst HACTi ensure its stable high activity in the oxidation of monophenol (I) by molecular oxygen and resistance to moisture. The modified alkaline catalyst HACTi is not soluble in the reaction solution, easily and quickly separated by a gravity settling, which excludes its loss, provides cleanliness of received diphenoquinone (II) without additional cleaning, and minimizes reagent consumption and the formation of sewage during synthesis.