The Heterogeneous Catalyzed Oxidation in the Liquid Alkaline Medium of 2,6-di-tert-butylphenol into 3,3′,5,5′-tetra-tert-butyl-4,4′-diphenoquinone

An effective alkaline catalyst POC (phenols oxidation catalyst) for 2,6-di-tert-butylphenol oxidation is considered. The composition of new heterogeneous catalytic system and the speed of oxidation reactions of 3,3′,5,5′-tetra-tert-butyl-4,4′-diphenoquinone synthesis with the use of this catalyst have been studied. Keywords: 2,6-di-tert-butylphenol, 3,3′,5,5′- tetra-tert-butyl-4,4′- diphenoquinone, 3,3′,5,5′-tetra-tertbutylbiphenyl – 4,4′-diol, alkaline catalysis, base, sulfur organic compounds oxidation products, phenol with room substituent.

The international important and pertinent scientific and technical purposes today it is the maximal intensification of processes, the improvement of ecological component of their production, as well as the lowwaste development of technologies. The existing and emerging technologies of stabilizers production are also among those tasks. At present, we have the high level of modern requirements for the environmentally safe production and use of organic and high molecular substances (EU REACH regulations), on the toxicity (list of carcinogenic hazardous substances IARC). So, they assume a wider range of phenol antioxidants application replacing on the whole efficient, but more toxic antioxidants with the nitrogen contents [1]. The compounds of the substituted phenols class have a low toxicity and high levels of antioxidant activity. Therefore, they are approved for the use in the products for the medical and food industries [2].

The antioxidant 3,3′,5,5′-tetra-tert-butylbiphenyl-4,4′-diol (hereinafter will be referred as bisphenol (I)) and its intermediate product 3,3′,5,5′-tetra-tert-butyl-4,4′-diphenoquinone (hereinafter will be referred as diphenoquinone (II)) [3] perform great theoretical and practical interest. The efficiency of their use and the mechanism of their action as antioxidants for general-purpose synthetic rubber such as SKI-3, PBR, etc [4, 5] were shown in the previous studies. The possibility of their use in medicine [6-12], for polyolefins stabilization [13-17], as well as for the oils stabilization [18-20]is known also.

Earlier studies testify that the oxidation of 2,6-di-tert-butylphenol (hereinafter will be referred as monophenol (III)) by oxygen in alkaline medium go through the anion-radical mechanism (known as singleelectron transfer) till the formation of diphenoquinone (II) (Scheme 1) [21-23].

The main disadvantages of the phenols oxidation in alkaline medium are the insufficiently high oxidation rate and the deficiency of effective method for the alkali regeneration. That causes to the necessity of its subsequent neutralization with acid. This leads to the continuous spending of alkali and acid, the formation of large amount of wastewater, the increase in the working costs and the metal consumption in the manufacturing an antioxidant, just as ecological pollution.

The problems and prospects of the use of diphenoquinone (II) and the above mentioned bisphenol (I) it represents the big interest to continue researches concerning development of effective and low-waste technologies for their synthesis [21, 24-33].

The glass cylindrical vessel (1) with 100 ml capacity, equipped with a sampler (2), the gas supply tube (3), the reflux condenser (4) and the temperature control system EKT Hei-Con (5), was used as a reactor. The reaction mixture in the reactor was heated and stirred using magnetic stirrer MR Hei-Standard of Heildolf Company (6). Oxygen was fed into the reactor from a balloon (7), the flow rate was regulated by a valve on the flow meter readings (8). The kinetic curves plotting of diphenoquinone (II) accumulation was performed by photocolorimetry on Ekros PE5300V spectrophotometer at the wavelength of λ = 540 nm, according to the light absorption data of diphenoquinone (II) solution. There were two layers in the reactor after the completing of oxidation and sedimentation. The top layer (hydrocarbon phase) was separated from the lower layer (liquid catalyst) at a temperature over 70oC.

The chromatography-mass spectrometry analysis has been carried out on the instrument GCMS 2010 Plus Shimadzu (Japan) to determine the composition of catalyst POC. The ionization method was an electronic ionization. The ion source temperature is 220oC. A capillary column Slb-5ms «Supelco» with the length of 30 m and diameter equal to 0.32 mm; the phase layer thickness-0.32 microns was used. The gas carrier is helium. The chromatograms obtaining conditions are the following: injector temperature is 280oC; helium flow rate through the column is 1.42 ml / min; flow division (split) is 1:3. The initial temperature of the column was 80oC (2 minutes); the thermostat heating rate was 10oC/min; the final temperature was 280oC.

The preparation for chromatography-mass spectrometry analysis of POC catalyst was carried out as follows: the liquid alkaline catalyst POC was neutralized with 5% sulfuric acid to pH 7, then the water was evaporated at 95oC.

The obtained saline solution was mixed with methanol and filtered off from precipitated salts in order to extract polar compounds and separate inorganic salts. Methanol was evaporated and the filtrate was analyzed. The identification of the components was performed by using a mass spectra library NIST-11.

The investigated catalyst POC is a waste 30% alkaline product of the heterogeneously catalyzed butane fraction sweetening at “LUKOIL-Nizhegorodnefteorgsintez” Ltd. [34]. This alkaline catalyst consists of the sulfur oxidation products and products extracted with alkaline solution from straight-run gasoline fraction.

The use of the proposed catalytic system, due to its good delamination, in the oxidation reactions of monophenol (III), allows to separate reaction mixture and the catalyst until the temperature of diphenoquinone (II) crystallization. Therefore, that permits to exclude from the synthesis scheme an environmentally uncomfortable step of neutralizing alkaline catalyst in the reaction mixture. Determination of the POC catalyst composition was carried out by chromatography mass spectrometric analysis (Fig. 2) of products extracted with methanol. Oxygen containing sulfur organic compounds, namely methyl-methane-thiosulfonate, dimethylsulfone, dimethylsulfoxide etc., were send away from composition of POC catalyst (Table 1).

On the basis of the compounds, extracted from POC catalyst (Table 1), can suppose that the products of extensive oxidation of sulfur compounds in hydrocarbons, could serve as a catalysts in the process of oxidation reaction of monophenol (III) to diphenoquinone (II).

The experiments with pure aqueous potassium hydroxide solutions (Fig. 3) were carried out to compare the efficiency of the proposed catalyst POC. Potassium hydroxide was chosen as an alkaline agent due to its use in the installations of butanes desulfurization [34]. 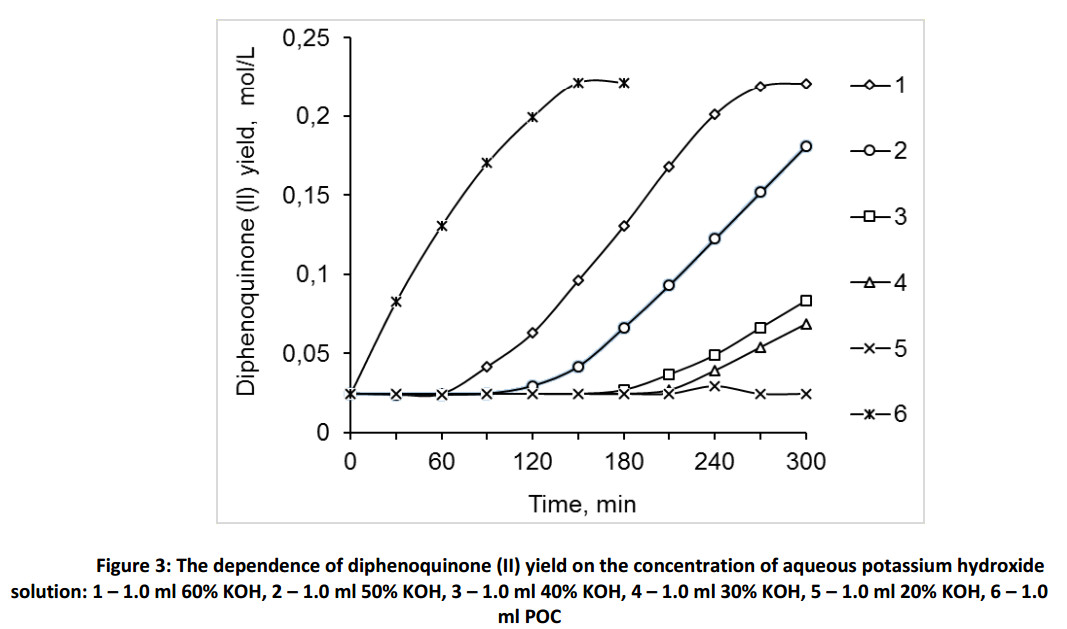 The investigation of the influence of the proposed catalyst POC amount at the monophenol (III) oxidation reaction showed that the reaction has no induction period (Fig. 5). Moreover, the increase of the catalyst amount showed the rise of the initial oxidation rate.

The deficiency of the induction period in presence of POC as compared with pure alkali solutions, can most likely be explained by the presence of oxygenated sulfoxides and sulfones in POC catalyst, where the oxygen activity is higher the activity of molecular oxygen due to the formation of methyl sulfonium ion [35]. The absence of the dependence from the amount of POC catalyst, as it was in the case of the aqueous 60% alkaline solution, is presumably explained by the presence of surfactants such as potassium salts of organic acids in POC catalyst, identified by chromatography mass spectrometric analysis (Table 1). The surfactants, which increase the interphase interaction of the air, the aqueous alkaline, and hydrocarbon phases in the heterogeneous mixture of reaction. The reaction mixture analysis data (Table 2), obtained by gas chromatography earlier and after oxidation of monophenol (III) in the presence of 60% aqueous potassium hydroxide and POC catalyst, showed that in the oxidation process of the monophenol (III) in presence of POC conversion is not less than 98.4%. The selectivity of diphenoquinone (II) is 85-90%, of 2,6-bis(tert-butylphenol)- 1,4-benzoquinone (hereinafter will be referred as 2,6-benzoquinone (IV)) is about 5% and of bisphenol (I) is up to 10%. Necessary to note, that in the presence of POC catalyst the maximum conversion of monophenol (III) is achieved much faster than that for aqueous 60% KOH solution.

We studied the effect of the individual sulfur compounds of POC, dimethylsulfoxide (DMSO) and dimethylsulfone (DMS), to determine the reason of the accelerating action of POC catalyst at the oxidation process of monophenol (III) (Fig. 6).

The initial speed rate of reaction demonstrate in the model systems, that the individual components (dimethylsulfoxide or dimethylsulfone) catalyze oxidation in aqueous 60% KOH, but their activity is lower than POC catalyst. Therefore, the special reaction has been carried out in presence of both components contained in the catalyst, thereby bringing the composition of the model alkaline solution closer to the composition of POC catalyst. As seen from Fig. 6, the insertion of both components into the reaction mixture simultaneously leads to a greater acceleration of the reaction, comparable to the speed rate of oxidation in the presence of POC catalyst.

It is known that dimethylsulfoxide is an effective oxidizing agent in the presence of the bases, including the oxidation processes of primary and secondary alcohols [35-37]. At the same time necessary to remember, that sulfones are characterized by high chemical and thermal stability, they are resistant to the oxidation and their transformations into sulphides is occur with difficulty [38]. We showed experimentally that the oxidation of monophenol (III) with dimethylsulfoxide and dimethylsulfone in the argon atmosphere does not occur without the add of alkali during of the first 60 minutes of reaction (Fig. 7).

However, the addition of 1.0 ml of 60% KOH on the 60-th minute leads to the beginning the oxidation reaction of monophenol (III) in absence of oxygen. In presence of dimethylsulfoxide the reaction speed rate is slightly higher than in presence of dimethylsulfone. This shows that in presence of a strong alkaline, due to the formation of phenoxyl-anion, the single electron transfer might occur also with dimethylsulfone. It is evidence of the possibility of oxidation of monophenol (III) in the absence of oxygen.

On the basis of obtained data the following reaction scheme can be assumed. In the first stage the phenoxyl-anion is formed in the presence of base (Scheme 2). Then, in the presence of dimethylsulfoxide a single electron transfer proceeds, forming phenoxy-radical, which undergoes to dimerization process into bisphenol (I). According to the same scheme bisphenol (I) oxidized until the diphenoquinone (II).