The oxidation of 2,6-di-tert-butylphenol to 3,3′,5,5′-tetra-tert-butyl-diphenoquinone in alkaline medium with sulfuric oxygen-containing organic compounds (dimethylsulfoxide, dimethyl sulfone) and aqueous solution of potassium hydroxide has been studied. An effective alkaline catalyst for 2,6-di-tert-butylphenol oxidation is considered. The alkaline catalyst is based on products of mercaptides oxidation, obtained in process of caustic regeneration of liquefied petroleum gases sweetening from mercaptanes. Elementary and fractional analyses of catalyst has been defined. A comparative analysis of the kinetics of oxidation of 2,6-di-tert-butyl phenol with model reactions have been investigated.

Nowadays there is a following paradoxical situation in Russia: with large volumes of polymers realization as well as a huge planning to expand their production in the next years there is no any strategy for creating and increasing of amount of domestic stabilizers. This time there are only morally outdated stabilizers, which are produced in small values.

According to the information above the problem of creating highly effective domestic stabilizers for polymers which are able to compete with world production of such type is a topical problem.

One of the perspective phenolic antioxidant for industrial application is 4,4′-bis (2,6-di-tert-butylphenol) (BP). It has all positive properties, which are necessary for its widely usage and it is profitably different with its property of different ways of using BP for stabilization of cautchouc, plastics and rubber, as well as fuels and oils [1-5]. According to the Standard 12.1.007-76 the stabilizer 4,4′-bis (2,6-di-tert-butylphenol) is dated back to harmless chemicals and permitted for using in polymers, which are in contact with food products, as well as in polymers of medical supplies.

Figure 1.A two-step process of the BP synthesis.

The main condition in the most part of the works on methods of synthesis of DPQ by the oxidation of MP (Step 1, scheme 1) is the presence of a catalyst of alkaline nature. However, the oxidation rate in the alkaline condition of MP remains rather low and the process needs intensification.

The continuation of studies of the development of efficient and low-waste technology of BP’s synthesis remains popular considering the current problems and prospects of using BP.

Carrying of analyses. Constructing of kinetic cumulating curve of DPQ performed according to the light absorption of the reaction solution of DPQ in samples with photocolorimetric method on the spectrophotometer Ekros PE5300V at a wavelength λ = 540 nm.

Table. 3. The contents of the initial components and the final products in the oxidation reaction of MP with oxygen in the presence of catalysts – [16 mol / l] aqueous KOH and POC. The concentration of the catalyst in the reaction mixture is 3.0 wt%.

The element analysis of mixture was held in workstation Auriga Cross Beam (Carl Zeiss). The microscope is equipped with an energy dispersive spectrometer Inca X-MAX (Oxford Instruments) with a resolution of 127 eV.

The task to increase basement during the reactions of oxidation of MP can be solved by using super base systems, which include sulfoxides and hydroxides of alkaline metals. This was clearly shown in the works of Vitkovskaya N. M., Mc. Gregor, Stuart, O’Donnel and others [9-12]. Stuart and O’Donnel showed [10] that the hydroxide-ion activity in the water solutions of dimethylsulfoxide increased with the increase of its concentration. Increased reactivity allowed leading base-catalyzed reactions at room temperature or at much lower temperatures. For example, Kram [11] and others learned that the leading of Volf-Kishner reduction reactions and Coupe elimination can take place at room temperature.

During the searching of common mechanism of nucleophile reactions’ catalyze in the presence of dimethylsulfoxide Kingsburry [12] showed that increasing of speed takes place even at low concentrations of dimethylsulfoxide and it is caused by changes in enthalpy. The effect here does not depend on the charge of reactants.

The new catalyst system (POC) for oxidation of MP is offered in this work from the position of basicity increase. The POC (table 1) represents water solutions KOH with alkaline concentration of 30% resulting at installation of heterogeneous-catalytic mercaptan removal from butane fraction of the “LUKOIL-Nizhegorodnefteorgsintes” LCC [13], which contains products of deep oxidation of sulfur compounds.

The method of gas chromatography-mass spectroscopy revealed that POC contains an oxygen organosulfur compounds, such as dimethylsulfoxide, dimethylsulfone, methylmethanethiosulfonate, etc.

The quantity of the sulfur content in the POC catalyst is determined on the base of elemental analysis (Table. 2).

We can compare catalytic activity of POC with aqueous solutions of KOH model (Fig. 1), because POC catalytic system is aqueous alkaline solution based on potassium hydroxide. Experiments show that the guide-potassium hydroxide is the most active in comparison with sodium hydroxide, what, apparently, can be explained by bigger radius of the outer electron shell of KOH.

The high speed oxidation of MP and absence of induction period are mentioned in the presence of a POC catalyst.

It is important to mention here that maximum conversion of MP in the presence of POC catalyst is achieved two times faster in comparison with an aqueous KOH solution under the same conditions.

To identify the cause of the accelerating action of POC catalyst on the oxidation of MP we studied the influence of dimethylsulfoxide (DMSO) and dimethylsulfone (DMSO2) (Fig. 3a, b), which were identified as part of the POC by the method of gas chromatography-mass spectrometry (Table. 2) 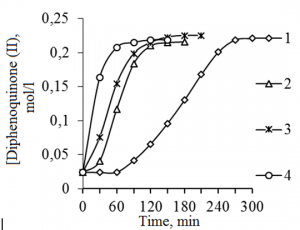 Thus, the meaning of incepted speed of reactions in the model systems in presence of oxygen shows that individual components accelerates the oxidation of MP being the part of the catalyst – aqueous solution of potassium hydroxide (Fig. 3). While concentration of dimethylsulfoxide and dimethylsulfone increases and reaction of catalyst concentration (aqueous solution of potassium hydroxide) remains unchangeable the speed of reaction increases.

In the process of studying  patterns of 2,6-di-tert-butylphenol the co-catalytic action of sulfur containing compounds (dimethylsulfoxide or dimethylsulfone) was found. These compounds were identified in the composition of alkaline phenol oxidation and allow increasing the initial reaction speed and decreasing induction period.