Characteristics of the Stabilising Action of Phenolic Antioxidant

CHARACTERISTICS OF THE STABILISING ACTION OF PHENOLIC ANTIOXIDANT 4,4′-BIS (2,6-DI-TERT-BUTYLPHENOL) IN THE AGEING PROCESS OF RUBBERS

4,4?-Bis(2,6-di-tert-butylphenol) (BP) is of great interest to  scientists  and  practitioners  on  account of  its  high stabilising effectiveness in processes of ageing of carbon-chain polymers, primarily elastomers.

In all probability it can be assumed that the high potential  of  the  stabilising  action  of  BP  is connected with its ability readily to be oxidised to 3,3?,5,5?-tetra-tert-butyl-4,4?-diphenoquinone (DPQ) under conditions of thermal oxidation of polymers with the formation of an equilibrium system and with subsequent participation of the products of  transformation in the inhibition of the thermo-oxidative degradation of polymers [1].

With  the  aim  of  obtaining  experimental  proof  of the proposed hypothesis, it was of interest to conduct a comparative study of the anti-oxidative activity of BP and DPQ, and also model mixtures based on BP and DPQ, under conditions of ageing of rubbers.

Investigations  were  conducted  under  standard conditions  adopted  in  factory  practice  at  the Nizhnekamskneftekhim  Open Joint Stock Company. Specimens of butyl rubber, SKI-3 polyisoprene rubber, and SKD-N polybutadiene rubber containing the investigated and industrial antioxidants were oxidised in hot air at 140°C for 90 min (for SKI-3) and 120 min (for SKD-N and butyl rubber).

Testing  of  butyl  rubber  specimens  under  ageing conditions showed (Table 1) that the greatest effectiveness is exhibited by BP which in its stabilising properties is superior to industrial antioxidant 2,2?-methylenebis(4-methyl-6-tert-butylphenol) – AO-2246 – which is currently used at Nizhnekamskneftekhim. DPQ is markedly less effective than antioxidants BP and AO-2246 in stabilizing the physicomechanical properties of butyl rubber.

It was shown that, for rubber SKI-3 (Table 2), both BP and DPQ are effective stabilisers, and also mixtures based on them. These stabilisers ensure retention of the physicomechanical properties of SKI-3 at the level of the amine antioxidant Dusantox-1 widely used in industry, and  they  perform  considerably  better  than  phenolic antioxidant AO-2246.

The index used in evaluating the stabilising properties of  antioxidants  in  SKI-3,  characterising  the  viscosity gradient  over  a  prescribed  period  from  the  start  of rotor rotation J, again indicates the effectiveness of the stabilisers investigated (see Table 2): reduction in this index corresponds to an increase in the antioxidative stability of the rubber [2].

Physicomechanical  tests  of  SKD-N  also  showed the high effectiveness of the antioxidants investigated (Table 3). In the presence of individual DPQ, the Mooney viscosity of SKD-N rubber hardly changed under ageing conditions. Industrial AO-2246 proved to be considerably less effective in the stabilisation of SKD-N than DPQ, BP, or their mixtures. 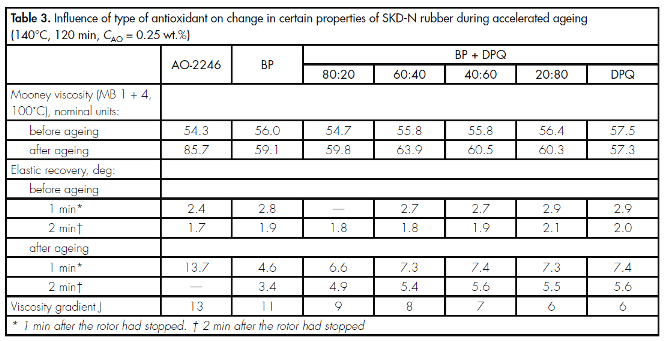 From the data given in Table 3 it can be seen that, in SKD-N, maximum anti-oxidative activity is exhibited by  individual  DPQ,  which  far  outperforms  BP  in  this regard; in the presence of mixtures of DPQ with BP, the values of index J decrease in proportion to increase in the amount of DPQ in the mixture.

Differences in the effectiveness of individually used DPQ in the stabilisation of butyl rubber and SKI-3 and SKD-N are evidently due to the speci? c chemical nature of the rubbers, which is governed by the different degree of unsaturation, and consequently to different mechanisms of their ageing.

Data of differential thermal analysis (DTA) con? rmed the high effectiveness of BP, DPQ, and their mixtures in the stabilisation of rubbers SKD-N and SKI-3 (Table 4).

As can be seen from the data given in Table 4, when stabilisers BP and DPQ are used, and also mixtures based on them, the temperature of the start of oxidation of SKD-N increases by 15–20 K, and the intensity of oxidative processes is roughly halved, assessed from the area of the exothermic peak of oxidation of the rubber, by comparison with industrially used antioxidant AO-2246.
In the case of rubber SKI-3, DPQ and BP, according to DTA data, ensure a temperature of the start of oxidation of the rubber that is comparable with that observed when amine antioxidant Dusantox-L is used (see Table 4).

On the whole, analysis of the data obtained indicates the fairly high effectiveness both of BP and of DPQ and their mixtures in the inhibition of the thermo-oxidative ageing of elastomers. It was established that DPQ is superior in a number of indices to antioxidant BP.

On the basis of data obtained by the present authors and data in the literature [1, 3, 4], a cyclic mechanism of the stabilising action of BP and DPQ can be assumed, including their mutual transformations in the process of inhibition of the thermo-oxidative degradation of polymers: 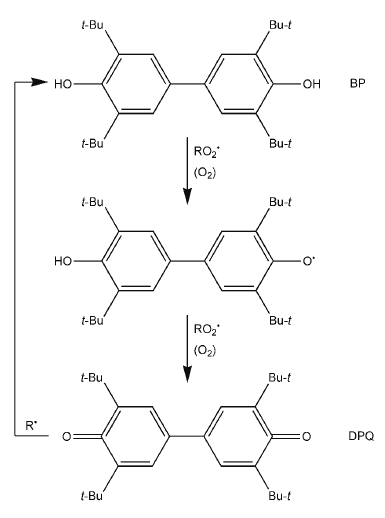 It is known that the basic reaction of inhibition of the oxidation of carbon-chain polymers is the acceptance by the stabiliser of peroxide radicals (RO 2• ) promoting the development of kinetic chains of oxidation of the substrate.

4,4?-Bis(2,6-di-tert-butylphenol)  is  capable  of interacting with peroxide radicals to form an intermediate phenoxyl radical, the interaction of which with another peroxide  radical  yields 3,3?,5,5?-tetra-tert-butyl-4,4?-diphenoquinone (DPQ). The interaction of DPQ with the alkyl radicals (R • ) contained in the system leads to the formation of BP and ole?n.

Thus, features of the stabilising action of 4,4?-bis(2,6-di-tert-butylphenol), based on the high inhibiting activity of  its  transformation  products  (DPQ  and  mixtures  of DPQ with BP) in processes of oxidation of rubbers, have been revealed for the ? rst time. These results can serve as the basis for the individual use of DPQ both as an independent stabiliser and as a co-component with BP in stabilising mixtures for rubbers.

2.  I. A. Novakov et al., Methods for evaluating and controlling plastoelastic and vulcanisation properties of elastomers and composites based on them. Khimiya, Moscow, 2000, 240 pp.