Synthesis of 3,3′,5,5′-Tetra-tert-butyl-4,4′-stilbenequinone and Its Catalytic Activity in the Liquid-Phase Oxidation of Inorganic Sulfides

Ahmadullins: Science & TechnologiesSynthesis of 3,3′,5,5′-Tetra-tert-butyl-4,4′-stilbenequinone and Its Catalytic Activity in the Liquid-Phase Oxidation of Inorganic Sulfides

Synthesis of 3,3′,5,5′-Tetra-tert-butyl-4,4′-stilbenequinone and Its Catalytic Activity in the Liquid-Phase Oxidation of Inorganic Sulfides

An important environmental problem in oil proces- sing and petrochemical industries is efficient neutral- ization of sulfide-containing alkaline wastes before their discharge into biological treatment facilities. For this purpose, various methods of catalytic liquid-phase oxidation with atmospheric oxygen are widely used in industry [1–4]. The main disadvantages of the existing catalysts include low catalytic activity, low selectivity, and low stability in alkaline medium. In this work we have synthesized 3,3′,5,5′-tetra-tert-butyl-4,4′-stilbene- quinone [1, IUPAC name 4,4′-(ethane-1,2-diylidene)- bis(2,6-di-tert-butylcyclohexa-2,5-dien-1-one)], con- firmed its structure, and studied its catalytic activity in the liquid-phase oxidation of Na2S with oxygen.

Stilbenequinone 1 was synthesized by oxidation of 2,6-di-tert-butyl-4-methylphenol (2) with hydrogen peroxide in the presence of potassium iodide. The formation of stilbenequinone 1 is the result of C–C dimerization of phenoxy radicals generated by oxida- tion of sterically hindered phenol 2, which was ac- companied by dehydrogenation [5]. The formation of phenoxy radicals in the oxidation of 2 was confirmed by ESR and was thoroughly reviewed in [6–9]. The primary act of the oxidation is elimination of hydrogen from the hydroxy group [7, 10, 11] by the action of iodine atom arising from homolytic dissociation of molecular iodine (Scheme 1). Phenoxy radical 3 pos- sesses an alkyl group in the para position and is unstable. It undergoes disproportionation to initial phenol 2 and methylenequinone 4 [12, 13]. The reaction mixture acquires lemon yellow tint due to formation of

4. Spontaneous dimerization of unstable methylene- quinone 4 gives bisphenoxy radical 6 which is con- verted to a mixture of stilbenequinone 1 and dihy- droxydiphenylethane 7 (Scheme 2) [12–15].

Apart from disproportionation, initially formed radical 3 is capable of isomerizing to hydroxybenzyl radical 8 via hydrogen transfer from the methyl group to oxygen [16–21]. Dimerization of 8 leads to the formation of compound 7 which is oxidized with hy- drogen peroxide to final stilbenequinone 1 (Scheme 3). 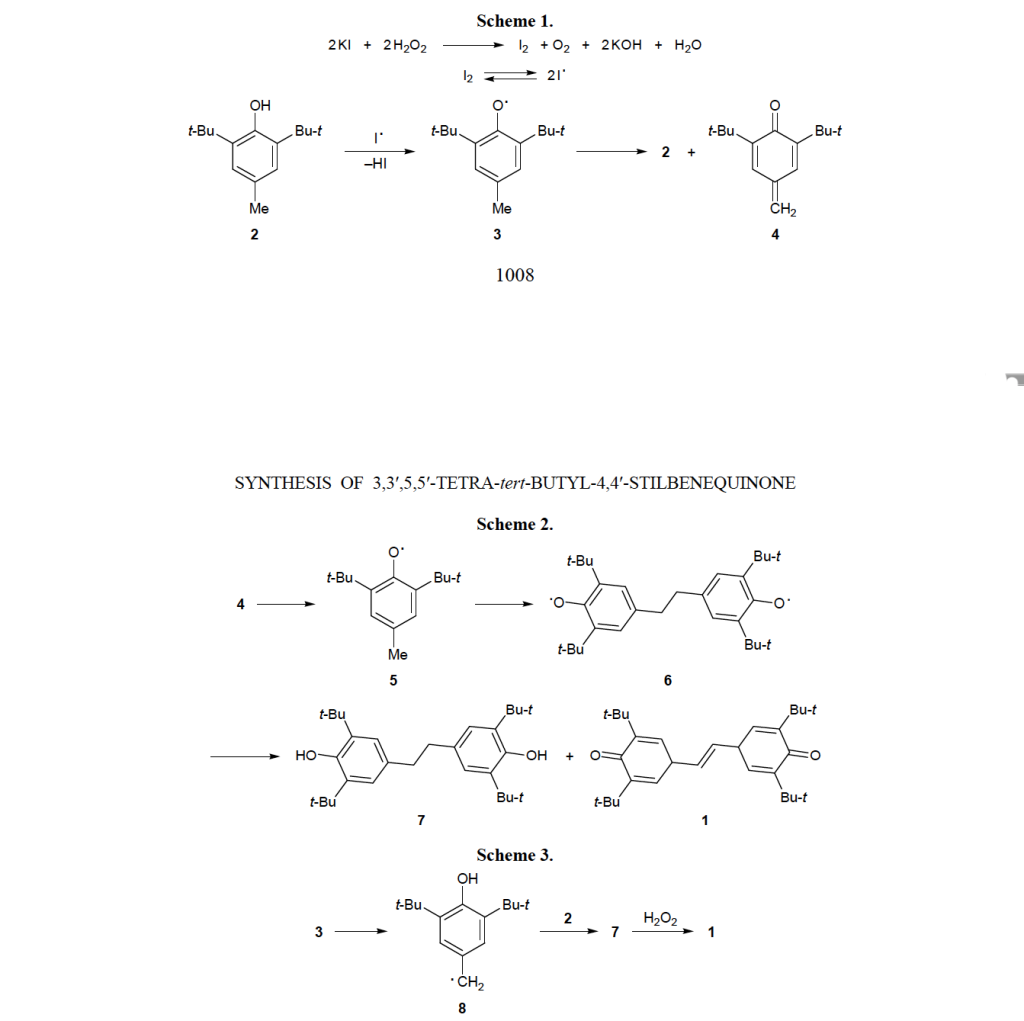 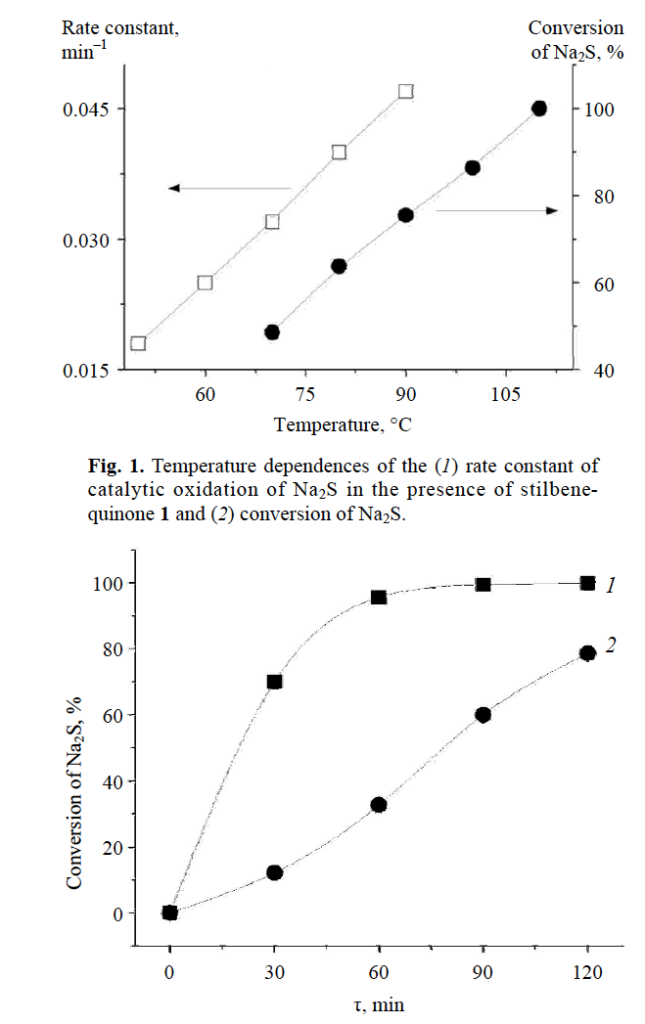 The catalytic activity of stilbenequinone is also sensitive to pH of the medium. The data in Table 1 illustrate variation of the conversion of sodium sulfide (pH 13.5) and sodium hydrogen sulfide (pH 9) in the presence of stilbenequinone 1. It is seen that the rate of oxidation of Na2S is higher than the rate of oxidation of NaHS. According to published data [24, 25], hydroxide ions catalyze oxidation of hydroquinone to benzoquinone; therefore, higher concentration of OH– ions favors regeneration of the catalyst in the oxidation of sulfide sulfur.

The observed pattern can be rationalized as follows. Quinones are conjugated α,β-unsaturated dicarbonyl compounds characterized by large dipole moments, and excess electron density therein is localized on the oxygen atom. Therefore, quinones are very sensitive to electrophiles [26]. Ammonium ions generated by dis- sociation of ammonium sulfide are strong electrophilic species capable of blocking active sites of the catalyst with subsequent complete deactivation.

The structure of quinones largely determines their ability to participate in chemical reactions. With the goal of elucidating the relation between the structure of quinones and their catalytic activity in the oxidation of sodium sulfide, we compared the activities of stilbene- quinone 1 and 3,3′,5,5′-tetra-tert-butyl-4,4′-dipheno- quinone [1,1′-bi(cyclohexa-2,5-dien-1-ylidene)-4,4′-di- one] 10. It is seen (Fig. 2) that the catalytic activity of 1 is higher than the activity of 10. Presumably, this is related to the mechanism of oxidation of sulfide sulfur in the presence of quinones, which is determined by both stages (Scheme 4).

This assumption was confirmed by the results of oxidation of Na2S with quinones in an inert medium (first stage in Scheme 4). Stilbenequinone 1 is superior to diphenoquinone 10 in the oxidizing ability (Fig. 4). Unlike compound 10, the two cyclohexadiene frag- ment in molecule 1 are separated bu two CH units. The higher reactivity of stilbenequinone 1 is determined by higher accessibility of the CH groups to attack of nucleophile [6, 27].

The second stage in the catalytic oxidation of sulfide sulfur in the presence of quinones (Scheme 4) is the oxidation of 9 or 3,3′,5,5′-tetra-tert-butyl-1,1′-bi- phenyl-4,4′-diol (11, reduced form of 10). Here, the polarity of the hydroxy group is important. Change of the O–H bond polarity in going from one hydroquinone to another determines the difference in the energies of dissociation of that bond and hence their different oxidizabilities [28].

Unlike compound 11, the conjugated bond system in molecule 9 includes the CH=CH double bond in addition to the aromatic rings. Therefore, the electro- negativity of the oxygen atom in 9 is higher, and the Coulomb integral of the oxygen δ-orbitals is more negative. Such change of the δ-electron structure of the OH bond increases its polarity and reduces the energy of dissociation, so that compound 9 should be oxidized more readily than 11. This was confirmed experi- mentally (Fig. 4).

The concentration of sulfides was determined by potentiometric titration according to GOST (state standard) no. 22985.

Catalytic oxidation of inorganic sulfides was carried out in a 150-ml cylindrical glass reactor which was charged with a mixture of 40 mL of an inorganic sulfide solution, 20 mL of kerosene, and a required amount of the catalyst. Oxygen was passed through the mixture under stirring at 1400 rpm using a magnetic stirrer on heating at a required temperature.

The oxidation of inorganic sulfides with quinones in an inert medium was carried out in a 150-mL stain- less steel high-pressure reactor. A mixture of 40 mL of an inorganic sulfide solution, 20 mL of kerosene, and a  required amount of the catalyst was stirred at 1400 rpm.