New Developments and Implementations in the Field of Desulfurization

NEW DEVELOPMENTS AND IMPLEMENTATIONS IN THE FIELD OF HYDROCARBON-STOCK DESULFURIZATION

Processes involving the removal of sulfur compounds from gases and liquid petroleum products are analyzed. Economic expediency of the implementation of low-waste methods of demercaptanization of gases, gasoline and kerosene cuts, gas condensates, and light crudes with the polymeric catalyst KSM is substantiated. A complex desulfurization flow plan, which permits maximum extraction of natural sulfur-organic compounds, lowering of the content of total sulfur in the light cuts, and improvement of hydrofinishing conditions of the heavy cuts is proposed.

Of the existing methods employed for the demercaptanization of light hydrocarbon stock (LHCS), methods of the alkali extraction of mercaptans with regeneration of saturated mercaptides of the alkali solution by oxidation with atmospheric oxygen in the presence of a homogeneous [1], or heterogeneous [2] phthalocyanine catalyst have come into the most widespread use.

Merpeisov et al. [3] propose a method for the alkali-free “dry” demercaptanization of liquefied gases, gasoline, kerosene, gas condensates, and crude by passing the stock with air over an MARC catalyst via a filter with a catalyst, or by inducing contact between the product being treated and the stoichiometric amount of air directly in the flow of stock – in the pipelines and settling tanks. This method is non-regenerative, and in contrast to extraction methods of alkali treatment, does not permit recovery of mercaptans from gases and gasolines, i.e., reduction in the total-sulfur content of the latter.

Moreover, the water-soluble phthalocyanine catalysts are neither chemically nor thermally stable, and are subject to hydrolysis in alkaline media; this limits their service lives to 3-4 months in the alkali-treatment system. The alkali solution of the KTK catalyst is considered spent, and is replaced by a fresh KTK solution when its concentration of free alkali is reduced to < 6% by weight; this will also result in contamination of the discharges by alkali and metal salts.

As compared with familiar domestic and foreign analogies, use of the polymer-based heterogeneous catalyst KSM for regeneration of the mercaptide-containing alkali is a basic advantage of the Demer-LHCS process (Fig. 1). The composition and procedure employed in the preparation of this catalyst promotes stable retention of the catalytically active components in the polymer carrier, their increased resistance to catalytic poisons, alkalis, and thermal effects, and stable activity over their entire industrial service life. This eliminates flushing of catalytically active components from the KSM catalyst and their access to the alkali solution, the need for periodic or continuous replenishment of the KCM with expensive salts of variable-valence metals, and undesirable contamination of industrial discharges.

The KSM catalyst is produced in the form of a stereoregular-packing unit with a developed geometric surface, which contributes to improved mass exchange between the alkali being regenerated and the air. It is securely fixed in the regenerator; this limits the sphere of action of the catalyst, preventing oxidation of the mercaptides that remain in the alkali with the formation of disulfides beyond the regenerator.

The Demer-LHCS process is used for the demercaptanization of the butane-butylene cut (BBC) in all plants designed for the combined refining of G-43-107 and KT-1 crudes of the former USSR. These plants have operated successfully from 1990-1996 to the present at the Mazheikia, Moscow, Ufa, and Lisichansk oil refineries. The process in question was introduced to the Novo-Yaroslav refinery for demercaptanization of the propane-butane-butylene cut with a 1A/1M cat cracker in 2000 [4], and at oil refineries operated by the Sibneft’ and LUKOIL Cos. in 2008.

– Reduce capital and operating expenditures as a result of improvement of the process-flow diagram, and a reduction in the amount of equipment employed by eliminating the preparation and replenishment stages of an alkali solution by a catalyst solution;

– Lower the consumption of alkali to 0.04-0.07 kg/ton, and extend its service life from 3-4 months to one year by depleting the alkali solution to zero free alkali;

– Extend the service life of the phthalocyanine catalyst from 3-4 months to 10 years;

– Ensure deep removal of mercaptan sulfur from the gases (from 0.1 to ? 0.001 wt. %) over the entire service life of the catalyst without its being replenished or regenerated;

– Reduce the volume of discharges, and lower their toxicity sharply owing to more complete depletion of the alkali, and prevent free alkali and heavy-metal salts from gaining access to the discharge.

Treatment of heavily mercaptanized gasoline cuts is usually carried out in two stages:

First – removal of the light C2-C3 mercaptans from the gasoline with the isolation of disulfides during catalytic regeneration of the alkali solution by atmospheric oxidation; and,

Second – deodorization of the gasoline by atmospheric oxidation of the C4+ mercaptans to disulfides. 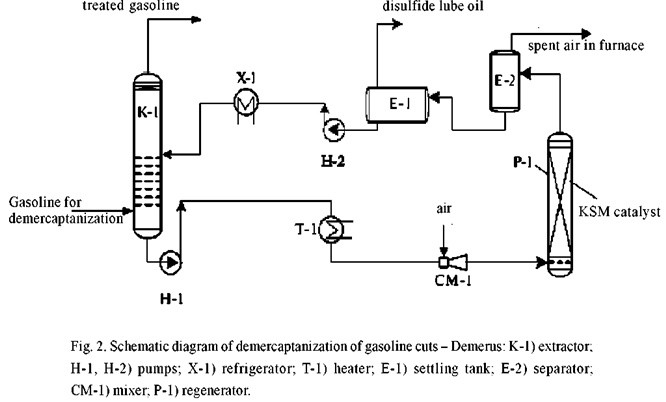 The Demerus extraction agent is distinguished from the water-alkaline solution by a significantly highe sulfur content; this enables us to:

– Increase the degree of extraction of natural sulfur-organic compounds, and appreciably lower the total-sulfur content of the gasoline cut;

– Shorten the settling time required for the products removed from the extraction agent, and preclude their water flushing after the extractor;

– Reduce capital and operating expenditures as a result of a reduction in the amount and volume of the equipment employed in production areas, and a decrease in reagent consumption: alkalis, water, and heavy-metal salts; and,

– Reduce the volume and toxicity of the discharges that are formed.

Familiar processes of the demercaptanization of kerosine cuts are based on oxidation of the corrosion-aggressive mercaptans within them to inert disulfides by atmospheric air in the presence of heterogeneous catalysts in an alkaline medium. They are conducted under soft conditions, and do not effect a change in the total-sulfur content of the kerosene. Capital expenditures for the construction of plants for these processes is nearly 12 times lower than those for the construction of hydrofinishing plants [5].

The greater part of the familiar processes involving demercaptanization of kerosene – Merox (UOP Co.) [6], Merikat (Merikem Co.), DMD-1 (All-Russian Scientific-Research Institute of Hydrocarbon Feedstock [7], and the Scientific-Research Institute of Petroleum Production [8] – are based on use of coal-base catalysts prepared by adsorption impregnation of activated coal by an aqueous-alkaline solution of catalytically active components, for which various water-soluble derived cobalt and iron phthalocyanines, or salts of copper, nickel, vanadium, etc. are used. Unreliability of adsorption interaction between the coal carrier and catalytically active components and alkaline agent will result in gradual flushing of the latter from the pores of the carrier (coal), their carry-off with the fuel being treated, and hydrolytic disintegration of the catalytically active components in the water-alkaline medium. This dictates:

The primary distinguishing characteristic of the Demer-KSP process is the use of a polymer-base KSM catalyst, the catalytically active components of which, in contrast to those contained in the coal-base catalysts, are neither carried-off with the kerosene, nor with the promotor, for oxidation of the mercaptans in the kerosene; this precludes periodic or continuous maintenance of the KSM catalyst by expensive compounds of variable-valence metals and their undesirable contamination of refinery – waste water.

Use of a KSP promotor, which is absolutely insoluble in kerosene, and which is readily and completely separated from it by simple decanting, is another distinguishing feature of the Demer-KSP process; this enables us to eliminate from the flow diagram the traditional water flushing and drying of the kerosene, and shorten considerably the list of equipment required.

The Demer-KSP process (Fig. 3) is carried out in a single stage – direct oxidation of mercaptans by atmospheric air dissolved in the kerosene over a KSM catalyst in the presence of a KSP promotor with simultaneous removal of acid impurities contained in the kerosene, and some of the reaction and dissolved moisture in the kerosene [9]. An experimental batch of directly distilled kerosene treated by this process in a pilot plant at the Moscow refinery successfully passed qualification tests at the All-Russian Scientific-Research Institute of Oil Processing. License agreements for implementation of the process are being finalized with three leading oil refineries.

As compared with familiar domestic and foreign analogies, the Demer-KSP process makes it possible to:

– Reduce capital expenditures by eliminating the preparation and maintenance of a catalyst, and the drying and final adsorption treatment steps of the kerosene from the flow diagram of subassemblies;

– Lower operating expenditures by diminishing the consumption of the expensive catalyst components, water, and alkali required for the process; and,

– Reduce the volume of waste water from the plant, and eliminate sources of contamination of plant discharges by heavy-metal salts.

Demercaptanization of Gas Condensates and Light Crudes on KSM Catalyst.

In hydrofinishing highly mercaptanized Astrakhan gas condensate, it was established that the presence of mercaptans in the stock will result in the formation of coke deposits, and a considerable shortening of the inter-regeneration running time of the hydrofinishing plant owing to thermal decomposition of the mercaptans with subsequent polymerization of the products of destruction, as a component part of which up to 60% of coke deposits by weight must be included [10]. This suggests the expediency of preliminary demercaptanization of high-mercaptanized gas condensates and light crudes prior to their hydrofinishing. Such a scheme is also attractive from the standpoint of a reduction in the corrosion activity of the stock as a result of removal of mercaptans, which possess a low thermal-stability threshold (140-170°C), and which cause vigorous corrosion of equipment in heating zones, the from crudes and gas condensates [11].

The following flow plan for the desulfurization of crudes and gas condensate is most rational (Fig. 4):

For small volumes of stabilization gases and a low hydrogen-sulfide content (Fig. 5), they can be treated by the method of desulfurization of associated casing-head gas on KSM catalysts (ACHG-KSM): chemosorption of the hydrogen sulfide and mercaptans by an alkaline solution. The sulfide-and mercaptide-saturated alkaline solution is regenerated by atmospheric oxidation on an KSM catalyst with periodic withdrawal of some of the spent alkaline solution in the crude-preparation unit, and delivery of a balancing amount of fresh alkaline solution to the treatment system.

Demercaptanization of stabilized crudes and gas condensates by the Demerus extraction agent will provide for maximum extraction and rational utilization of natural sulfur-organic compounds in the form of disulfides – a valuable raw material for petrochemistry, and significant lowering of the total-sulfur content in the stock. Subsequent oxidation of the demercaptanized stock will make it possible to appreciably increase the depth of hydrofinishing of the high-sulfur diesel cut [12] and vacuum casing-head gas, as well as to extend the duration of the inter-regeneration run of the plant employed for hydrofinishing of gas condensate and high-sulfur crude cuts.

Possessing a higher boiling point as compared with the initial compounds, moreover, the oxidized sulfur-organic compounds will be concentrated in the high-boiling cuts during subsequent distillation of the oxidized condensate (or crude). As a result, sufficiently deep desulfurization of the gasoline and kerosene cuts can be achieved without their additional hydrofinishing.