Aqueous process condensates (PC) amounting to 50-60 m3/h are formed in existing type KT-1 combined plants for deep refining of petroleum. The main contaminant in these condensates is ammonium sulfide with its content reaching 4000 mg/liter (on conversion to sulfur). A PC treatment unit was included as part of the KT-1 plant in the Pavlodar refinery as envisaged by project. This unit treats the PC by a method of blowing away the hydrogen sulfide and ammonia with hydrocarbon gas at 98°C temperature and 1:100 ratio by volume of PC to gas.

Two years of operating experience with this unit showed that the required neutralization depth is not achieved. Concentration of residual sulfide sulfur is 500-3000 mg/liter which is 10-60 times more than its maximum permissible concentration for biological treatment plants (BTP). In view of this, it became necessary to replace the less efficient method of PC treatment as provided for by the project with the industrially approbated process of local catalytic oxidation treatment of effluents (LCOTE). Essentially, the LCOTE process consists in liquid-phase oxidation of toxic sulfides contained in effluents up to thiosulfate and sulfate with oxygen of the air in the presence of the heterogeneous catalyst KS-1 [2].

Volume of PC formed in different sections, and sulfide sulfur content in them, were determined from a study on the KT-1 plant of the Pavlodar oil refinery (Table 1). Data obtained show that it is inadvisable to treat PC from the vacuum distillation of atmospheric reside section since sulfide sulfur content here does not exceed the maximum permissible concentration for the BTP. Taking into account the positive experience of using aqueous PC in electrical desalting unit-atmospheric vacuum tubestill unit [3], PC from this section can be recommended for use as circulating water in crude oil desalting. In this manner, the output of the PC neutralization unit using the LCOTE method is 20-25 m3/h. For this PC flow, the oxidation column of the project PC treatment unit facilitates the required condensate residence time in the reaction zone (more than one hour).

Experience of three years in using the LCOTE process at the Moscow oil refinery for treatment of a mixture of PC from the G-43-107 plant and alkaline sulfurous effluents formed during alkylation of benzenes in vacuum-tubestill units shows that 1h is adequate for neutralization of PC with 3000-4000 mg/liter initial sulfide sulfur content [1]. The project PC treatment unit in the KT-1 plant of the Pavlodar refinery was reconstructed in accordance with recommendations of the VNIIUS (All-Union Scientific Research Institute). The air pipe was led to the bottom of the oxidation column and the pipe was fitted for supply of the used up air to the furnace combustion chamber through a fire-screen. An efficient air distributor was fitted  at the bottom part of the column. The packing (Rasching ring) was removed and in its place, three layers (each of 2,6 m height) of catalyst KS-1 (2,5 t) were loaded in the form of 50 mm diameter Pallya rings.

Condensate from KT-1 plant enters a buffer tank by gravity flow (see Fig.1) where it is safeguarded from the hydrocarbons and pump fed through a heat exchanger and steam pre-heater (up to 75-80°C) to the top of the oxidation column. The neutralized PC is pumped out from the bottom of the column through a heat exchanger and air cooler to the BTP. Process air at 0.2 MPa pressure is supplied at the bottom of the oxidation column through the air distributor. The used up air from the column top is directed through the air cooler, separator, and fire-screen underneath the furnace combustion chamber for deodorization by heating.

Results of operation of the PC treatment unit based on the LCOTE method are in Table 2. The PC flow during the investigation was ?25 m3/h on the average and, sulfide sulfur content, 930-2200 mg/liter. Reduction in temperature in the oxidation column to 70°C and below leads to increase in residual sulfide sulfur content in the treated PC to 100-180 mg/liter. Thus, the optimum temperature in the oxidation column is 75°C and, air flow, 550-600 m3/h. The pH of the neutralized PC increases by 0.5 thus testifying to the formation of ammonium hydroxide. The main product of ammonium sulfide oxidation is ammonium thiosulfate. Hydrogen sulfide content in the outgoing air is ?5g/m3. 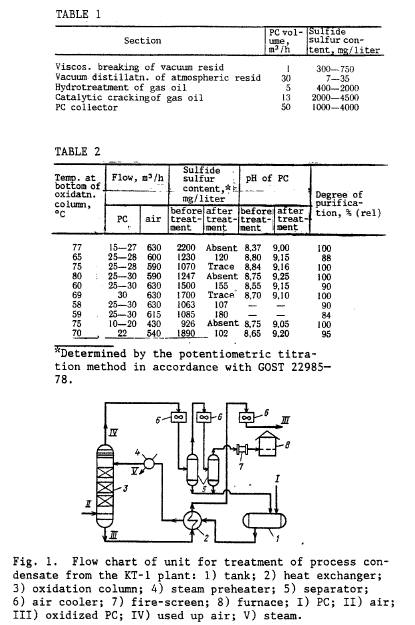 Experience in operation of the PC neutralization unit based on the LCOTE method showed that the air cooler provides for adequate degree of cooling of the PC and air without a blower. Compared to the project solution for neutralization of sulfide containing PC, the LCOTE process introduced in the Pavlodar oil refinery is characterized by lower steam and electrical power consumption since the process takes place at a lower temperature (75°C instead of 98°C for the project) and does not require subsequent MEA treatment of the hydrocarbon containing gas.

Based on results of industrial tests, it was recommended that all type G-43-107 and KT-1 deep refining plants which had been constructed earlier, and redesigned, be equipped with units for local catalytic oxidation of sulfur containing PC. Moreover, unlike plants operating in the Moscow and Pavlodar oil refineries, the type G-43-107 and KT-1 plants under construction, and being designed, contain units for hot separation of the hydrogen product. In the KT-1 plant of the Mazheik oil refinery of similar design, the presence of such a unit leads to 1.5 to 2-fold increase in sulfide sulfur content in the PC. This should be taken into account in selecting PC treatment process equipment and systems in designs of new plants.