Distribution of Sulfur-Containing Compounds in Streams

DISTRIBUTION OF SULFUR-CONTAINING COMPOUNDS IN STREAMS FOR CONCENTRATION OF PROPYLENE

Production of propylene is increasing steadily all over the world.  For example, it increased by approximately 8 times in the USA and Japan from 1965 to 1980 [1].  Many installations for combined refining of type G-43-107 and KT-1 oil are supplemented by installations for concentration of propylene in our country for the more complete utilization of the resources of propylene contained in refinery gases.  To produce propylene which satisfies the requirements of GOST 25043-81 for the concentration of sulfur compounds, it is necessary to know the group composition of these compounds and their distribution by technological streams, which will permit selecting the most economical and rational scheme for preparation of the raw material for the propylene concentration installation.

In this respect, the composition of sulfur compounds in propane-propylene fractions (PPF) processed in combined types G-43-107 and KT-1 catalytic cracking installations of the Moscow and Pavlodar Petroleum Processing Plants, and their distribution by fractions in the propylene concentration installation of the Moscow Petroleum Processing Plant, whose principal technological scheme is shown in Fig. 1, was studied.  The concentration of sulfur compounds on conversion to elementary sulfur was determined with the improved VNIIUS method, which provides for a high precision of the analysis [2].

The scheme for production of propylene from refinery gases includes sulfur purification and PPF rectification units, and in the case of production of a high grade of propylene, also a finished propylene drying unit.  Most of the PPF is eliminated from the sulfur compounds in the sulfur purification unit with an alkaline solution, and the remainder is redistributed between the propylene and propane fractions during rectification.  The data on the distribution of sulfur compounds in concentration of propylene in conditions of a poorly and satisfactorily operating hydrorefining section are reported in Table 1: the residual concentration of sulfur in the hydrorefined vacuum distillate is respectively 0.98 and 0.49 wt. %. 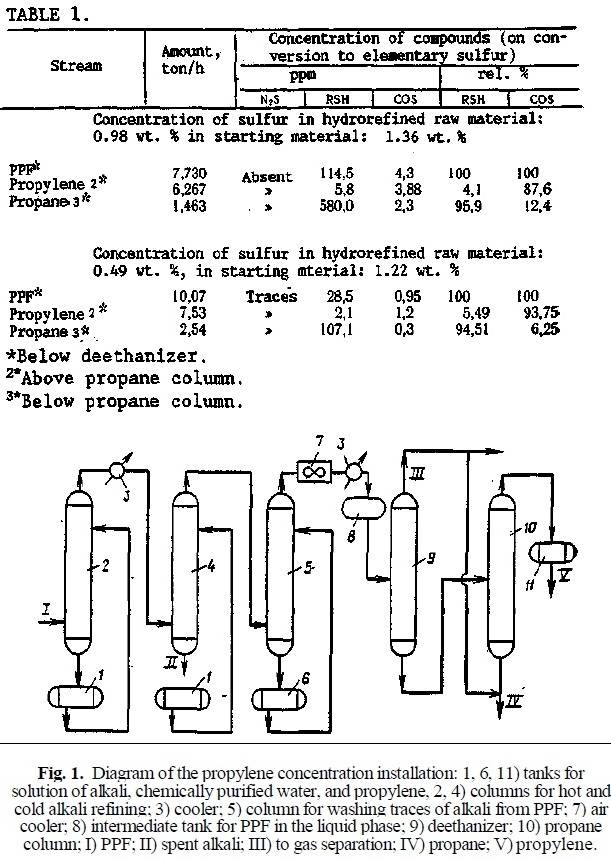 Most of the carbon oxysulfide is concentrated in the propylene (bp of 47.7°C) due to its low bp (-50°C) and only an insignificant amount (10-15% of the initial amount) is removed with the propane.  The residual concentration of COS in the propane satisfies the Exxon requirements: no greater than 2 ppm [3].  In this case, the probability of total conversion of COS into H2S is very low.  Propane with this concentration of COS was tested for corrosive aggressiveness (testing on a copper plate).