The opening of the Orenburg gas condensate field has posed a number of problems, mainly in the treatment of the gas, the wide cut of light hydrocarbons (WCLH), and the stabilized condensate to remove mercaptan, sulfide, and disulfide sulfur.

Construction of a specially designed complex at the Salavat Petrochemical Combine is planned [1] in order to handle the processing of the stabilized condensate and WCLH from the Orenburg gas processing plant. This design calls for mixing the depropanized wide cut with the stabilized condensate and desulfurizing this mixture in a hydrotreating unit.  However, the hydrotreating process involves major capital and operating costs. The nominal cost* for treating 1 metric ton of gasoline in the Salavat Petrochemical Combine is 2.67 rubles.

The wide cut may be demercaptanized by means of an effective process developed by VNIIUS and tested under commercial conditions in the example of n-pentane [2] (nominal cost of treating 0.54 rubles/ton); however, there is no currently available commercial method, other than hydrotreating, to remove sulfides, disulfides, and thiophenes.  Further, no data have appeared in the literature on the distribution of sulfides, disulfides, and thiophenes in hydrocarbon cuts.

The distribution of sulfur compounds in the hydrocarbon fractions of the Orenburg gas condensate has been investigated by means of a laboratory unit [3].  It was found that the disulfides and thiophenes are concentrated in the hexanes and heavier fractions, but the sulfides are distributed in the fractions beginning with n-butane.  In this connection, a feasibility study has been made on the production of a WCLH in the Orenburg gas processing plant with minimum content of C5-C6 hydrocarbons by making changes in the operating conditions of the unit producing this material.
According to the design, the WCLH is produced in the Orenburg gas processing plant in Unit 90 by re¬covery from the stabilization gases (treated to remove hydrogen sulfide) and the stabilized condensate (distilla¬tion range -35° to +230°C).  Unit 90 is designed in a two-tower scheme.   The first vessel is an absorption/strip¬ping tower (AST) used for absorption of the C3-C5 hydrocarbons from the stabilization gases (with stabilized condensate as absorbent) and deethanization of the saturated absorbent; the second is a stabilization tower in which the WCLH is separated from the saturated absorbent. In Tables 1 and 2 we have listed the main characteristics of the towers and their design operating conditions. 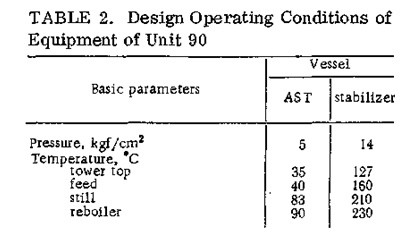 *A standard “reduced cost” including operating expenses and a standardpercentage return on capital – Translator.

The composition of the WCLH from the Orenburg refinery, as produced in accordance with the design scheme in Unit 90 of the Orenburg gas processing plant in December, 1974, was as follows: 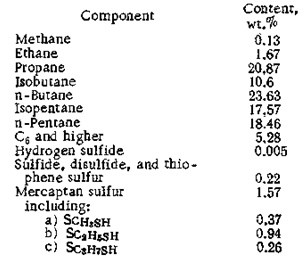 The individual composition of the mercaptans and sulfides was studied in a gas-liquid chromatograph with a selective coulometric detector of the flow type [4]. The length of the glass chromatographic column was 4 m, inside diameter 0.4 cm, column temperature 25°C, carrier gas (air) velocity 0.3 m/sec. The electrolyte was a 0.01 N solution of potassium iodide, fed in at a rate of 0.01 m/sec.

As can be seen from the data we have listed, the content of total sulfur in the wide fraction is 1.795% by weight, with the mercaptans accounting for more than 85% of the total sulfur.

Through a VNIIUS laboratory study of the process through which the WCLH is separated in the Orenburg gas processing plant, it was found that, when the WCLH is lightened up so that it contains no more than 10% C5 by weight, the disulfides and thiophenes are completely eliminated, and the sulfide [sulfur] content is reduced to 0.02% by weight.

In order to determine the feasibility of operating the unit under conditions giving a lighter WCLH (C5 content less than 10% by weight) with a reduced content of sulfide sulfur, the stabilization process was calculated -in an M-222 computer. The basis for this calculation was a program for calculation of absorption and fractiona¬tion processes by a relaxation method [5]. The experiment, which was performed over a wide range of varia¬tion of the process parameters, showed that the stabilizer can provide the required separation under the following conditions: pressure 14.5 kgf/cm2, tower top temperature 75°C, tower bottom temperature 180°C, reflux tank temperature 45°C, reflux ratio 2.   The decisive parameter of the process is the temperature of the stabilizer still.

The recovery of wide cut and C4 hydrocarbons are shown in Fig. 1 as functions of stabilizer bottom temperature, with various contents of C5 hydrocarbons.

With a stabilizer still temperature of 180°C, 85 wt.%ofthe potential butanes in thefeedare recovered. Under these conditions, the propane recovery is 90 wt.%, andthe content of pentanes in the WCLH does not exceedl0wt.%. The processing scheme provides for the possibility of operating the unit either with a continuous feed of fresh absorbent or with recirculation of absorbent.  In view of the fact that the major amount of the sulfur compounds enters the WCLH from the stabilized condensate used in the AST as an absorbent, it has been recommended that Unit 90 should be operated with recirculation of absorbent in the absorption-stabilization section. An experimental run of the unit in January, 1975, confirmed the feasibility of obtaining a WCLH with pentane content below 10% by weight. The composition of this cut is as follows: 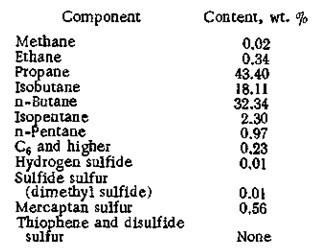 It will be seen that, when the contents of C5 and higher hydrocarbons in the wide cut are reduced, not only the sulfide, disulfide, and thiophene sulfur contents are reduced, but also the mercaptan sulfur.  This can be explained when we consider that the ethyl mercaptan (Tb = 35°C) distills to the extent of 80-85% with the n-pen-tane and remains in the stabilized condensate.

In order to treat the lighter WCLH to remove mercaptans by the VNIIUS method [2] in the central gas fractionating unit of the Salavat Petrochemical Combine, a tripotassium phosphate treating unit was reconstructed. The flow plan of this unit is shown in Fig. 2. 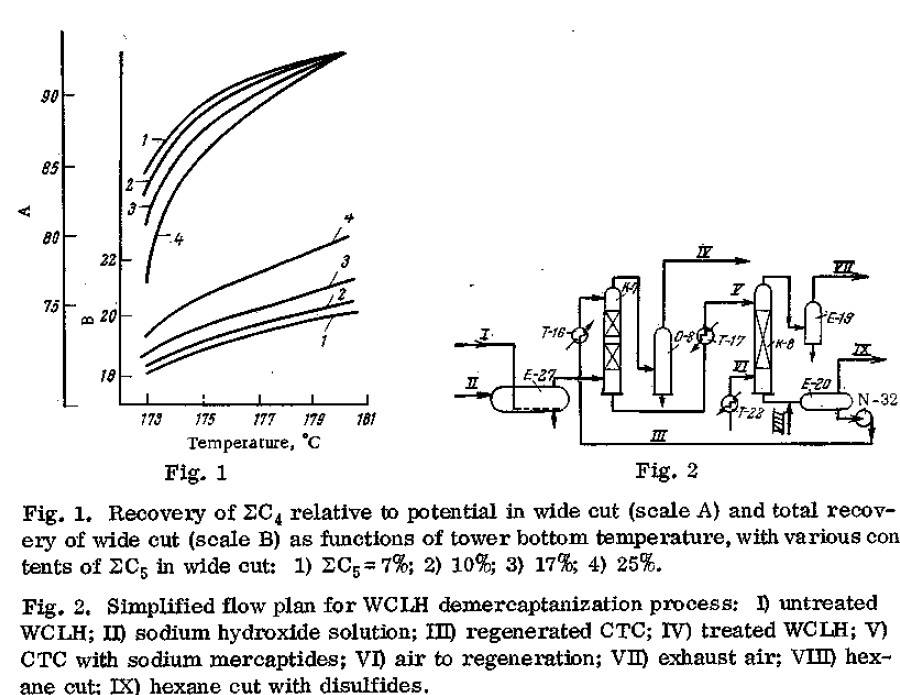 The wide cut of light hydrocarbons from the Orenburg gas processing plant is caustic treated in tankE-27 with a 10-15% NaOH solution to remove hydrogen sulfide. The hydrogen sulfide-free wide cut, at a temperature of 15-20°C, passes to the bottom of the extractor K-7, the tower of which is packed with two beds of 25 x 25 x 3 mm Raschig rings, -each bed 4.5 m in height. The upper part of the tower is fed, by means of the circulating pump N-32, with 12-15 m3/h of a catalyst complex that has been cooled to 30°C in the heat exchanger T-16, this catalyst complex representing the continuous phase in the tower. The catalyst complex (CTC) contains 0.1% by weight of the catalyst (sodium salt of cobalt disulfophthalocyanine) with a promoter, 15-20% caustic soda, 5-8% monoethanolamine, and 70-80% steam condensate.

In Tower K-7, extraction of the mercaptans proceeds in accordance with the reaction:

The sodium mercaptides pass quantitatively into the CTC layer, and the mercaptan-free wide cut leaves the top of the tower K-7 and passes to the clarifier 0-8 for removal of entrained CTC and then to 0-7 for mixing with feedstock of the central gas-fractionating unit.  The mercaptide-saturated CTC is withdrawn from the still of K-7 (governed by interface level) and passes through the heat exchanger T-17, where it is heated with steam to 40°C, after which it enters the regenerator tower K-8. This tower was reconstructed; the S-channel trays were removed, and the tower was packed with 25 x 25 x 3 mm Raschig rings in a single bed with a height of 6 m. The still of the tower K-8 was fed with process air in amount of 300-350 m3/h, preheated to 40°C in the heat exchanger T-22.   The tower K-8 operates under flooded conditions in a regime of emulsification; at 40°C with a pressure of 2-4 kgf/cm2, the caustic is regenerated in accordance with the reaction:

The spent air from the upper part of the tower K-8, passing through the separator/spray trap E-19, is directed to a furnace P-2 for combustion. The catalyst complex with the disulfides passes from the still of K-8 to the disulfide separator tank E-20, where the disulfides are washed out of the CTC with a hexane cut (Imetric ton/h). From E-20, the upper layer (hexane cut with disulfides) passes to a clarifier and then is pumped to hydrotreating. The bottom layer in E-20, consisting of regenerated CTC, is withdrawn (governed by interface level) and refed by the pump N-32 as the liquid wash in the extractor K-7.

The content of mercaptan sulfur in the wide cut after treating is less than 0.001% by weight, and the hydro¬carbons in the exhaust air amount to no more than 0.1% by volume.  The expected service life of the catalyst complex is 3-4 months.