Cleaning of light hydrocarbons from mercaptans is made by their alkaline extraction with following regeneration of saturated by mercaptides alkali solution by oxidation with oxygen in the presence of the homogeneous or heterogeneous catalysts for reactions:

Organic disulfides formed in the regenerators are not soluble in alkaline solution, but they are well soluble in hydrocarbons. Therefore, they are carefully removed from the regenerating alkali either by washing with gasoline, either by a long settling of the alkali solution.

Work analysis of alkaline demercaptanization of light hydrocarbon installations shows that [1.2] using alkali for regeneration of homogeneous catalysts, dissolved in circulating alkaline solution, oxidation of mercaptides with formation of disulfides lasts even out of the regenerator – in the pipeline and the extractor.

So, during inquiry of American installation “Merox” of New-Ufa OIL REFINERY in December 1977, it was established that in the regenerated alkali solution of catalyst complex at the entrance to the extractor disulfides’ content was 0.0195%  – after its settling for 4 hours and separation from the disulfides (without washing with gasoline). Residual content of mercaptan sulphur in purified from mercaptans Butane-butylene fraction (BBF) was 5-12 ppm, and total sulphur concentrations as high as 63-89 ppm.

Inquiry of DMD-2 on BBF demercaptanization in the presence of homogeneous catalyst IVKAZ (CTS) at Ryazan OIL REFINERY, held in April 2005, it was found that the content of mercaptides in regenerated solution of CTS immediately after the washing from disulfides with petrol is at 30-50% higher than that in the solution of the CTS at the entrance to the extractor. This tells us about the oxidation of mercaptides within the CTS outside the regenerator. Formed there disulfides with catlicked from CTS disulfides pass into the extractor from circulating alkali solution of CTS into cleanable raw materials, increasing the total sulphur content in it.

The paper [1] shows that the propane and butane faction of Iranian oil refinery refined mercaptans to install DMD-2 in presence of catalyst IVKAZ, the content of the total sulphur found according to the international standard EN 589-2008 is 50 ppm without adsorption purification and ? 35 ppm after adsorption purification of sulphur on zeolites. Mercaptan sulphur content in purified butane and propane is ? 5 ppm.

It’s known that light hydrocarbon disulfides are then collected on the basis of high-octane gasoline additive native raw materials – MTBE, which is an alkylate or polymergasole, raising the total sulphur content in them manifold. Thus, in the polimerdistillate of the Ryazan OIL REFINERY, derived from BBF with a concentration of mercaptan sulphur 2 ppm and sulphur about 20 ppm linked by disulfide content of total sulphur reached 200-400 ppm [2].

Due to the toughtening of rules on the content of sulphur in mobile fuel in 2012 up to the requirements of Euro 4-50 ppm [3], for regeneration of alkali  solvent by mercaptides to use heterogeneous catalyst, catalytically active ingredients which will not be taken with regenerated alkali. As shown in [4] oxidation of mercaptides in alkaline solution without catalyst is hardly processing. This is especially true for butane faction are demercaptanization of raw materials for production of high-octane additives listed above to gasoline sulphur content which is the same as in gasoline should be strictly limited.

Among well-known heterogeneous catalysts fully satisfies these requirements polymer catalyst KCM which catalytically active components are not soluble in alkali and solution and application technology of active components in polymer media provides them with a strong holding in the catalyst, unlike heterogeneous catalysts, adsorption-impregnated activated carbon or carbofibrous tissue (KFT), catalytically active components (CAC). It precludes of impaction of salts of heavy metals from KCM’s catalyst into circulating alkaline solution, i.e. formation of disulfides out of the regenerator. The catalyst is made in the form of a convenient in operation block packed with sophisticated geometric surface burst improving the mass exchange between alkali and air. It is permanently fastened in the regenerators, stable to alkaline, mechanically durable and heat persistent.

The long experiment of the “Demer-LUVS”  polymer catalyst of  KCM during BBP demercaptanization on installations cat cracking KT-1 and 43-107 from Majeyksk, Moscow, Ufa, Lisichansk and Omsk refinery showed its advantages over homogeneous-catalytic processes known as display figures [5.6]:

• quality of purifying – lower content of total sulphur in the cleaned product thanks to its pollution exclusion of disulfides;

• ecological – decrease of volume and reduction of toxicity by reducing the concentration of free alkali and salts of heavy metals in falling into sewage demercaptanization installations.

In connection with the foregoing it was chosen as the “LUVS” Demure-catalyst KCM in August 2010 for the preparation of raw materials but the installation of hydrogen fluoride alkylation-howl “LUKOIL-NijegorodNOS” and it was successfully launched for butane faction demercaptanization with the performance AGFU 29 m3/h. Process introduced by the reconstruction of existing equipment under the scheme presented in the figure. 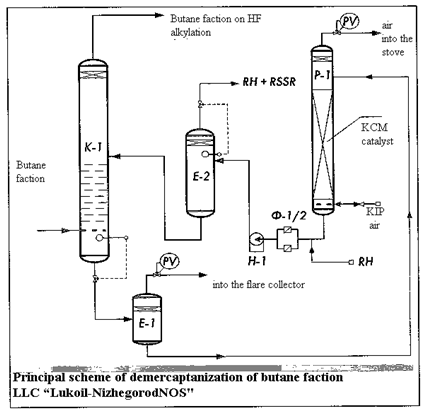 Butane faction purifying at this installation happens using water solution of CON with concentration 3-10%. Air purifying from CO2 is provided. Consumption of alkali solution is 3 m3/h, air consumption for regeneration is 50-60 Nm3/h. Analysis of purified butane on the device “Antek” period survey from 19.02. till 12.03.2011, showed that the total sulphur content in it anyway 2-3 ppm in standard 10 ppm; content of mercaptan sulphur dropped from 150-250 ppm up to 1-3, 0 ppm (normal is 5 ppm). Degree of regeneration alkali solution with mercaptides on catalyst KCM is 80-98% at 35-40° C.

Because of the specific properties of polymeric carrier oxidation of mercaptides on catalyst KCM compared with halogen catalysis is by getting all as disulfides and their oxidation products better – sulfonates and thiosulfinates [7]. Latest improve extraction ability of alkali solution and accelerate his regeneration, that allows to conduct depth of work of active of alkali in the “Demer-LUVS” to 1-3%. In the processes of “Merox” and the DMD-2 active alkali residue shall be not less than 6%, after which the alkaline solution together with the supply of the phthalocyanine catalyst is dumped with installation, polluting factory drains a lot of alkali and salts of cobalt.